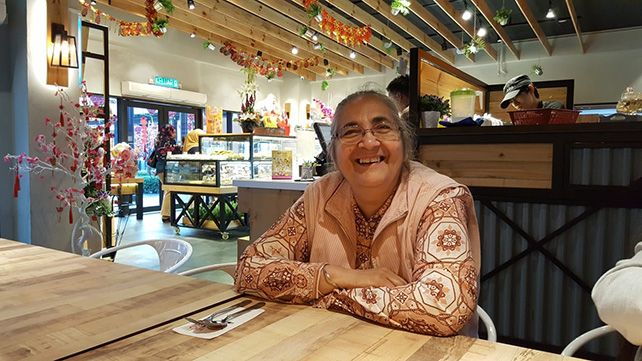 In its 8th year, the Lit Up Festival began as an indie platform for emerging 18-35 year old Singaporean writers, poets, spoken word, visual and theatrical artists. Now it is going regional, reaching out to ASEAN countries and beyond.

About 200 Singaporean and international poets, spoken word artists, storytellers, dancers, theatre and mime artists and youth delegates will be attending the three-day festival-symposium and street fiesta event at Lasalle College of the Arts, Aliwal Arts Centre and at Haji Lane. The free entry 3-day festival is open to the general public with a special focus on young people.

Ms. Savinder Kaur, Lit Up Festival Director and Co- Founder of the Writers Centre, Singapore, said “Lit Up translate texts to performance. We are working with the theme: Water, City, Sky which represents past, present and the future to showcase various oral traditions in South-East Asia, contemporary expressions of writing and performance as well as film, animation.”

“This year there is a special focus on Balinese theatre and dance as well as digital user-created virtual world platforms such as Second Life and the VR enabled Sansar, which have huge potential for art making, education and international community outreach.” said Dr. Chris Mooney-Singh, Lit Up Artistic Director and Co-Founder the Writers Centre.

The Writers Centre, Singapore and its sister non-profit Word Forward, the Founder of Poetry Slam™ in Singapore and Malaysia are responsible since 2003 for the development of the thriving spoken word scene in Singapore and across the Causeway. Monthly Poetry Slams at Blu Jaz Cafe attract capacity audiences. Three poet performers mentored by Word Forward are also recipients of the Young Artist of the Year Award from the National Arts Council.

Award-winning UK poet Daljit Nagra will present excerpts from his contemporary retelling of the Ramayana. A contemporary Balinese theatre company Teater Kini Berseri will interpret a Singaporean narrative poem and microfictions through mime, dance and puppetry. Keelat Theatre will stage a pantun (interactive poetry) performance and for the first time in Singapore audiences will also witness Filipino Balagtasan, a unique historical form of debate battle poetry in Tagalog and English. Nam Hwa Opera will perform in Teochew dialect with surtitles.

The symposium will be followed by Crash Test Theatre, a 10-minute play competition with a $1000 prize for the winning work. On Sunday morning there will mime, manga art, Chinese opera and YA fiction workshops at Aliwal Arts Centre followed by a cafe fiesta of poetry performances, readings, music and street theatre performances at Haji Lane venues from 1pm to 11.30pm. Those interested in virtual reality will be able to experience virtual worlds at the Virtual Media Zone above Muzium Cafe from 1pm.