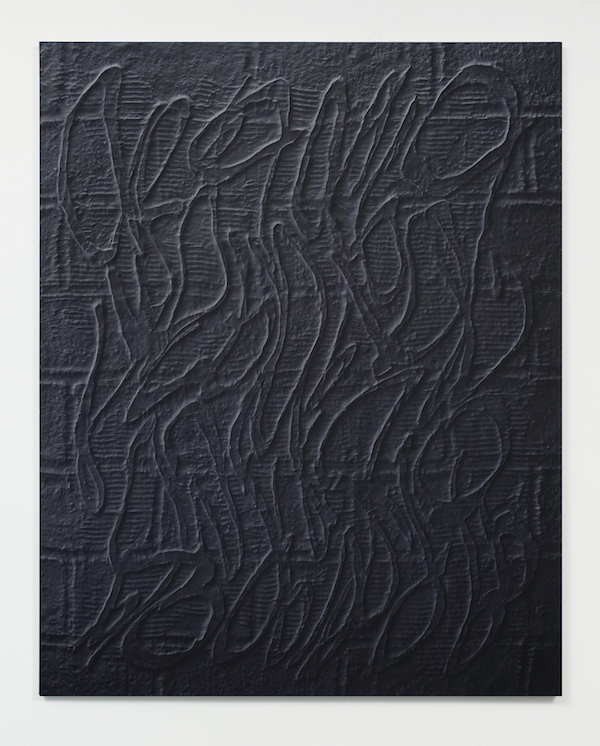 Despite their impasto appearance, Amir Nikravan’s paintings are optical mirages that fuse painting, photography and sculpture in a process that produces indexical veracity and illusionism but results in completely flat images; they are photorealistic ‘still life’ paintings of paintings, posing both a subtle critique and paradoxical demonstration of abstract painting’s ability to elicit the fundamental complexities of art and objecthood.

This December, ARNDT is pleased to present Masks, a solo exhibition of new paintings by the American artist. For his first solo exhibition with the gallery Nikravan will present a selection of works that perform the process of masking – covering, blocking, disguising – in both literal and metaphorical ways.

Central to Nikravan’s artistic practice is the technique in which his works are made. Paintings begin in a traditional manor with the build-up of many layers over time, only to be transformed and eventually destroyed. Once a painting is finished Nikravan wraps it in fabric and submits it to the forces of an industrial vacuum bag, creating a temporary topographical mold of the paintings’ surface. This cloaked and covered object is then painted with an airbrush, using various colors to approximate the raking light and shadow across the surface of the wrapped object; through this an indexical photographic image of the object becomes imbedded on the fabric, which is peeled from the form and mounted. The original painting is then destroyed. What remains for the viewer is a vividly insistent image; an illusion of the now inaccessible object.

Further heightening the illusionist quality of his works, Nikravan juxtaposes repetitive gestures, strokes, and lines upon the rigid grids of cinderblock and brick walls backdrops. For Nikravan, the wall performs as the ultimate metaphor for contemporary abstraction, acting as a confrontational limitation of space which the viewer is confronted and rejected, ultimately forcing them back into the space of the physical and psychological. The compression of space enacted between Nikravan’s painted marks and the underlying backgrounds they obscure perform the ontological planes of reality as a visual narrative for the viewer, eliciting through sight what can only be experienced in the physical realm.

In addition, Nikravan will introduce a new branch of works that enact the same conceptual strategy through a differing visual motif. In his Mask paintings, Nikravan literalizes the idea of blocking and obscuring by physically masking out parts of a painting. In these works simple shapes are layered and removed continually until a complex shape with many faceted openings emerges, creating window like openings and exposing the actual ground of the work itself- the canvas – as the ultimate structure/wall on which illusionism and representation take form.