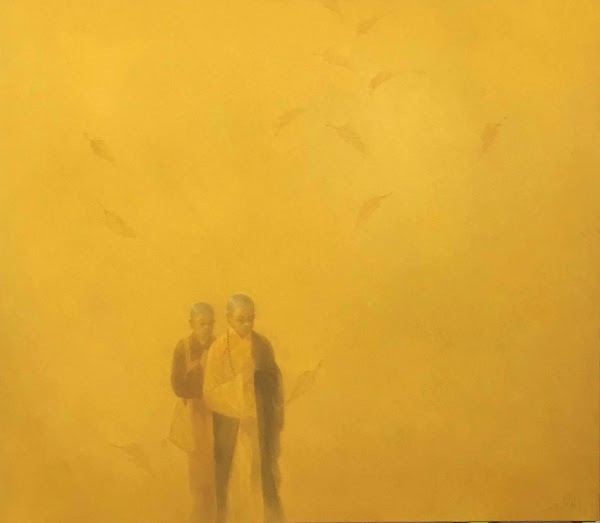 Meet the artist and see him at work. Bui Van Hoan was born in Hai Duong, Vietnam in 1971. He graduated from the Hanoi College of Fine Arts in 1994 and has specialised in oil on canvas paintings since then. His work is inspired by his serene and peaceful approach to life, often referred to in Vietnamese as “Thien”, roughly translated as a particular Vietnamese school of Zen  Buddhism.

As a painter, he is a master of light. His paintings reveal complexities not seen at first glance. He create layers within his scenes by using light, shadow and subtle variations in hue and texture. At first, one sees a relatively peaceful monochromatic scene. As one’s eyes get accustomed to the colour, layer upon layer of detail become apparent. Objects appear to move, leaves rustle and grasses sway. The mist that at first appears to shroud his paintings gives way to reveal layers and detail not originally apparent.

His work is truly a blend of east and west – his brush strokes result in an impressionist canvas but the subject is clearly Asian in inspiration and subject matter.
Bui Van Hoan’s paintings are found in the permanent collection of the Vietnam Fine Art Museum and have been exhibited internationally in London, New York, Rome, Tokyo and Singapore.