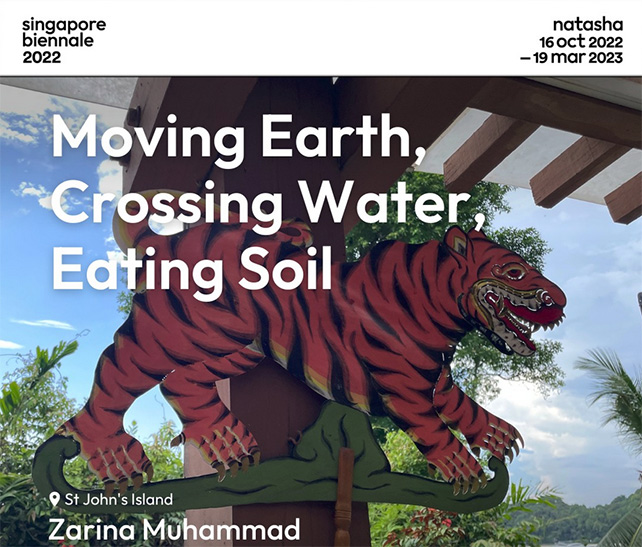 Moving Earth, Crossing Water, Eating Soil is an audio-visual-tactile installation that invites visitors to reorient the senses to the coordinates of unruly spaces on maps. Zarina Muhammad’s work will unfold over nine archetypal signatures and departure points namely – The Guide, The Witness, The Wrathful Deity, The Pyramidal Cell, The Gate, The Peculiar Habitat, The Rotating Naga, The Talisman, and The Pragmatic Prayer – and are presented as a diorama of (inter)cardinal directions, palimpsests and constellations that may be read or experienced in various poly-sensorial ways.

Papitas Tarpuycha / Earthing Potatoes is a collaborative project involving a site-specific installation on Lazarus Island, workshops, and a Quechua food ritual. The work is centred on the potato, a staple from the Andes as well as a common crop all over the world. The project explores the restoration of non authoritarian food relations following migratory trajectories of potatoes and reflects on migration, food production and ancestral techniques of cooking on the land and in the community.

In Kancil Mengadap Beringin, Shooshie Sulaiman imagines Sang Kancil’s encounter with the pohon beringin (banyan tree). Also known as the tree of life, the pohon beringin occupies an important position in Malay cosmology, marking the threshold between the spiritual world and the human world. In bringing together the dexterous mousedeer and the banyan tree thus, this installation commemorates Malay cosmology and intellect.

air cut into song is the collaborative project comprising of four installations presented across two SB2022 venues. The installation presented at Lazarus Island acts as a transmitter that would read the weather, while the installation at Tanjong Pagar Distripark will receive and broadcast the weather report. Alongside the installations are a series of weather-reports from Southeast Asia and beyond. This project is a collaborative effort between Moad Musbahi, Huruf, a type and design collective collective, Ejin Sha, an independent graphic designer, Flora Weil, a design engineer and artist, and Sukanta Majumdar, an independent audiographer and sound artist.

In Fermentation House, Donghwan Kam will be fermenting soya sauce in miniature house sculptures using an underground fermentation technic. These miniature house sculptures are installed across various SB2022 venues including Sentosa Cove, St John’s and Lazarus Island. This work was developed based on Kam’s earlier work entitled Fermentation Garden that saw the artist cultivating kimchi in similar miniature houses. Through these works, Kam continues to explore how domestic acts – such as cooking, fermenting, and distilling – are often situated in relation to time.