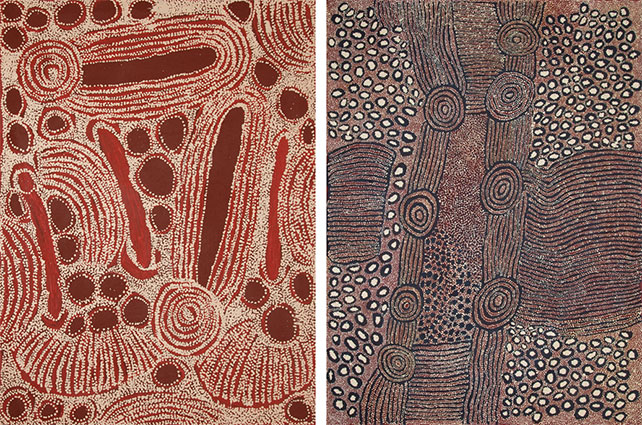 Ningura Napurrula was born at Watulka, south of the Kiwirrkurra Community, circa 1938 and was one of the earliest pioneer female painters of the company, completing her first paintings for Papunya Tula Artists in 1996. By 1999 Ningura had already amassed an impressive exhibition profile and was becoming a hugely successful and collectable artist and in 2003 she was chosen, along with four other Papunya Tula Artists, to have one of her paintings represented on an Australia Post international stamp. Arguably her finest moment came in 2004 when Ningura was one of eight Indigenous artists selected to have an example of their work incorporated into the architecture of the Musée du quai Branly in Paris and her ceiling oeuvre opened to the public in June 2006. Ningura passed away at Kintore in November 2013.

Nanyuma was born in the vicinity of Kiwirrkurra, close to Ningura’s birth place in approximately 1944 and despite only being a few years younger than Ningura her painting career has followed a more modest early trajectory, though in 1999 Nanyuma did also contribute to the Kiwirrkurra women’s painting.

Whilst their respective styles show close, interconnected, harmonious story-telling that’s central to the Pintupi culture, their styles also offer dramatically different painterly execution. Ningura adopted a more expansive/figurative approach to the songlines of her maternal lineage, the highly spiritual and secretive birth ceremonies of her mother, sometimes rough and seemingly haphazard in its rendering. Nanyuma conversely delivers more controlled dotting, using the stunning techniques mastered by her community colleagues such as Yukultji Napangati and Doreen Reid Nakamarra. The natural usage of positive and negative space to create pulsating lines of “tali” depicts her own important ceremonial stories. This style marries effortlessly with Ningura’s epic renditions of the genesis of life and these painstakingly produced complex paintings all augur a bright future with the masterly old being blended into the refreshingly new.