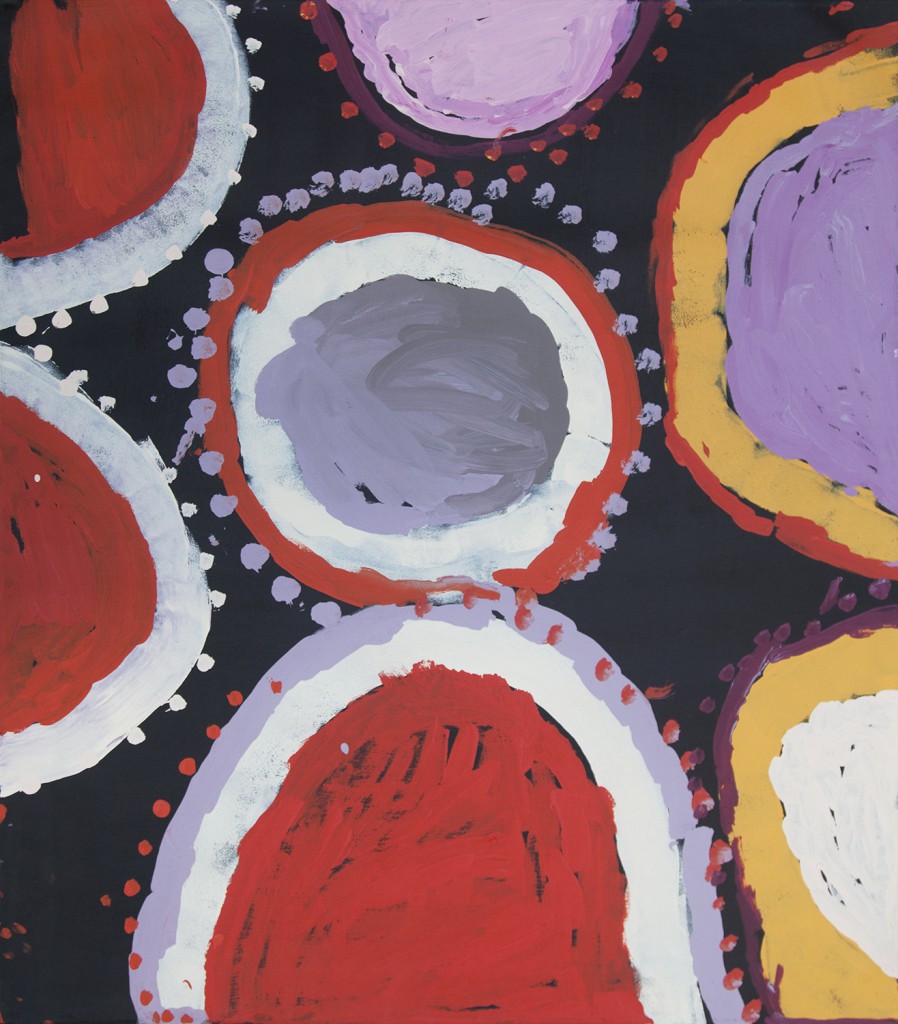 ReDot Fine Art Gallery is honoured to host Ninuku Tjuta, a follow up exhibition from the sell-out show by Ninuku Arts in 2012 and 2013. Deriving from a tiny community in the north-western corner of South Australia, Ninuku Arts is one of the most exciting art centres to emerge over the past 10 years.

The exhibition boasts an extraordinary group of master works painted by the three most senior men in the community, together with a small body of works by other pretenders to their throne. As the traditional owners of the land, these men hold the most important stories of their country deep within their hearts and are tasked with its survival and passage into the next generation.

This exhibition is a bold statement about ownership and history, but also a joyous collection of paintings acting as an invitation to the viewer – an invitation onto the land of these old tribal men. As well as teaching the international audience about their culture, the show aims to teach the emerging artists, laying down a challenge to take their culture forward in today’s modern world.

It is critical to the continuation of this great indigenous culture that it is taught to the future generations.

As senior man and Ngangkari (traditional healer) Harry Tjutjuna describes, “Old generation are here now and I am old generation too. Lots of old generation have passed away. What can we do? What happens when I pass away? New generation got to learn Tjukurpa (Dreaming Stories).”

Harry Tjutjuna is the most senior of the artists exhibiting. His unique style and approach has made him one of the most sought-after practising artists in the country. He paints a range of stories with both authority and courage. He is known for the drippy, painterly qualities in his technique, and is a natural colourist often choosing a palette of vibrant, poppy hues.

Senior artist Jimmy Donegan is another artist inspired by the colourful landscape, using a plethora of colours to depict his Tjukurpa (or Dreaming stories). Donegan continues to be celebrated as one of the most sought-after artists from the district to Australian and International collectors, galleries and institutions, since winning the prestigious Aboriginal and Torres Strait Islander Telstra Art Award in 2010.

Sandy Brumby joins these two colossal heavyweights. Born in the bush at Victory Downs, an outstation near Pukatja (Ernabella), Sandy was a stockman for many years, long before Kalka and the Pipalyatjara communities existed. In 2010, in his sixties, Sandy Brumby picked up a paintbrush for the first time and since then has religiously painted, discovering a passion for paint and a need to tell his story. The marks he uses are reminiscent of symbols seen in rock paintings around Uluru and Kata Tjuta. His paintings are raw and bold, demonstrating a strong connection to his country and culture. He has a deep love of colour and uses a broad palette when he paints, selecting the colours that sit side by side with natural intuition.

The exhibition begins on Wednesday 16th September and runs until Saturday 17th October 2015, in conjunction with our Eva Nargoodah solo show from Mangkaja Arts. A must-see show for anyone interested in following the recent developments in Indigenous Art and an opportunity to meet a beautiful and talented proponent of one of the world’s oldest art forms. 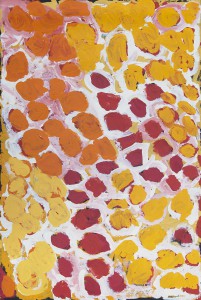 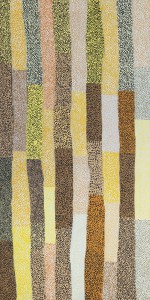