Of Things and Yesterdays 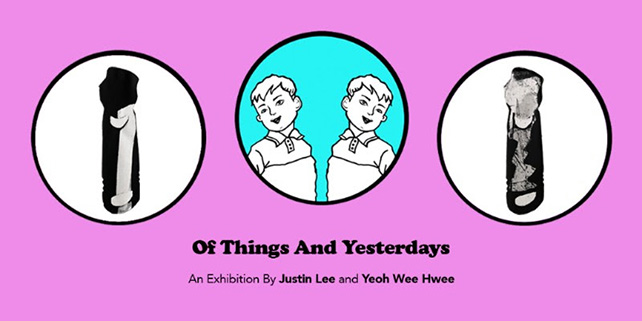 Justin Lee and Yeoh Wee Hwee’s joint exhibition Of Things and Yesterdays showcases new artworks developed during their art residency at NPE. While Justin Lee’s Nanyang Children story book series from the 70’s reflect upon how external influences and technology has transformed the way art is being created, Yeoh Wee Hwee’s No.1 Onwards series reflect inwards how our own upbringing and societal expectations bind us in our creativity. By examining the ‘yesterdays’ can we reflect on the ‘todays’.

Justin Lee is a Singaporean visual artist and designer. He has participated in numerous artist-in-residence progammes in Japan (Fukuoka, Studio Kura-2012/14, Itoshima Art Farm-2014, and Tokyo Youkobo-2013). After his graduation with a Diploma in Visual Arts (Fine Arts), he was one of the selected local artists trained at the Tyler Print Institute in New York. Over the years, he has participated in numerous exhibitions held in Singapore and internationally (2000-2002). Justin’s works bring a different understanding of today’s Singapore society and lifestyle with a blend of eastern and western cultures. Justin also seeks to record everyday lifestyle into visual art based on his cultural environment and questions appearances in its surroundings. He believes that art plays an important part in helping people to grow and to bring awareness to the important role
it plays.

Yeoh Wee Hwee graduated with a Bachelor of Arts (Hons – 1st Class) Fine Art with Contemporary Writing from University of Huddersfield, United Kingdom, in 2006. After receiving her Art Bursary (Overseas) in 2007 from Singapore National Arts Council, she continued to pursue her Master’s degree in Fine Art from The Glasgow School of Art, United Kingdom, where she graduated in 2009. She is currently a part-time lecturer in LASALLE College of the Arts and Nanyang Academy of Fine Arts.

Wee’s practice enquires into the idea of becoming through a work intensive operation on displacement and transgression. Nothing is stable, things are constantly in a state of becoming; in a state of flux where one never cease to slip and transform into another. No conformation and no definition can exist where structure and space collapse. The qualities and functions of the mass-produced materials used in our everyday lives are examined, exploited and challenged during the process of her exploration in order to transform them into objects, sculptures and installations overlaid with contradictions and ambiguity.