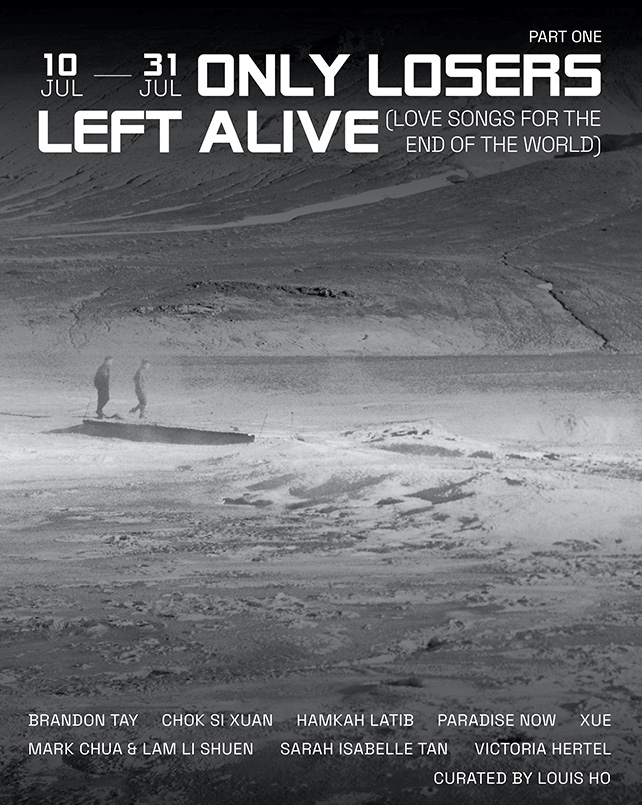 This group exhibition is a two-part project with a central proposition: if our world were to come to a screeching halt tomorrow, what would we be left with?

only losers left alive (love songs for the end of the world) features a roster of local and locally-based artists. It takes its visual and conceptual cues from cinema, featuring tableaux populated by objects, images and sounds that evoke the moods of science fiction. It draws inspiration from films, such as La Jetée (1962), Brazil (1985) and 12 Monkeys (1995), that envision disaster and/or dystopia, but filters that vision through the nostalgic aesthetics of the past.

Providing the real-world context for the mood of despondency is, of course, the current pandemic, and the climate of fear, uncertainty and paranoia in which the global population has been mired. With that backdrop in mind, only losers left alive (love songs for the end of the world) offers an oneiric vision of a calamity to come, understood through the memory of a yesterday that is mourned, lamented, grieved for.

Part one of the show takes place from July 10 to July 31 and features the work of Chok Si Xuan, Mark Chua & Lam Li Shuen, Hamkah Latib, Victoria Hertel, the collective Paradise Now, Sarah Isabelle Tan, Brandon Tay and XUE. Works range from site-specific installations, to video, to sound pieces that function as a soundtrack for the space.

While only losers left alive (love songs for the end of the world) transitions from the first part to the second, two iterations of a performance by XUE, in collaboration with musician Rudi Osman, will happen on 3 August and 4 August, 7.30pm at Yeo Workshop. The second half of the exhibition, which opens in August, will feature the work of Mark Chua & Lam Li Shuen, Victoria Hertel, Georgette Goh, Geraldine Lim, Masuri Mazlan, Sarah Isabelle Tan, Juria Toramae and Samuel Xun.