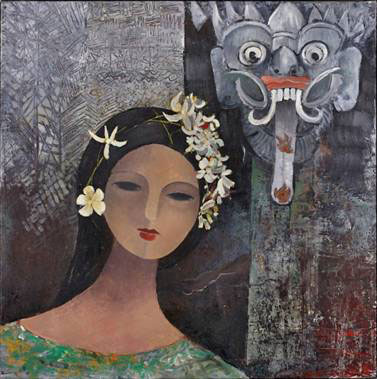 Artcommune is pleased to present Paintings by Tay Bak Koi which features 15 significant works by the late artist, covering from his early abstract experiment in 1962 to his later iconic styles of rendering bulls and multi-viewpoint pastoral scenes between the 1970s and 1980s. The past few years saw a revival of interest in Tay Bak Koi’s oeuvre, coupled with a strong, growing collectorship for his work. This exhibition will whet the interest of art aficionados looking to understand more on Tay Bak Koi’s artistic career and important contribution to our local art scene.

Tay Bak Koi (b. 1939 – d. 2005) is an eminent second-generation Singapore artist best known for his idyllic portrayals of fishing villages and kampongs, as well as stylised compositions of bulls and cock-fighting scenes in oil and watercolour. Having displayed evident talent in art as a youth, he enrolled in the Nanyang Academy of Fine Arts (NAFA) in 1957 under the recommendation of his father’s friend, who was the younger brother to Lim Hak Tai (the founder of NAFA). During his time at NAFA, Bak Koi was also a student of revered pioneer artist Cheong Soo Pieng, whose innovative brush techniques and amalgamation of East-West art forms inspired many second-generation artists. In fact, many of Bak Koi’s compositions from the 1960s bear traces of his former teacher’s style.

While it would take Bak Koi several years, the artist, known for his dedication to perfecting pictorial techniques, eventually developed his distinct visual poetics. In particular, the body of work that emerged between the late 1970s and 1980s strongly reflects his quest toward an increasingly sophisticated handling of forms and essences. This period saw Bak Koi arrive at some of his most stylised recurring motifs –the images of landscapes and buffaloes which both fascinate and endear with their dream-like quality and simplicity of forms.