Photography in Myanmar – From Colonial Exotica to Contemporary Photography 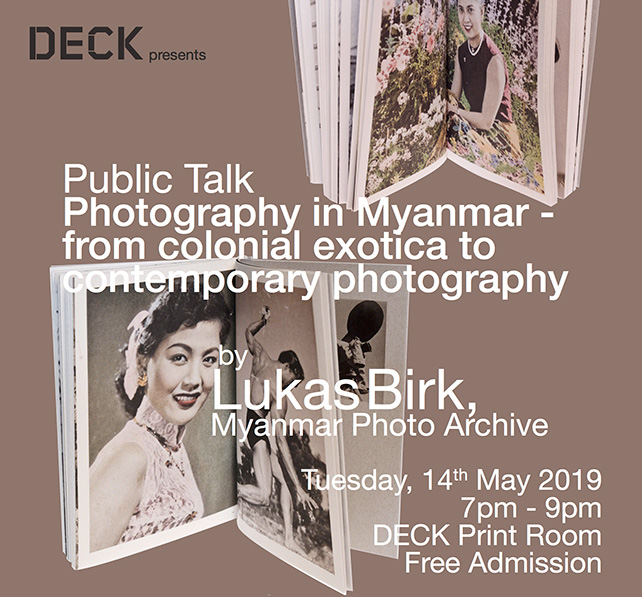 by Lukas Birk from the Myanmar Photo Archive

While the activities of European photographers from the mid-19th century are thoroughly documented, dated and conserved in Myanmar, what is missing, is knowledge of practices, economic contexts, and social attitudes towards photography. Especially after the country’s independence (1948) as well as the time following the coup d’état by General Ne Win (1962). The Myanmar Photo Archive (MPA) begun its activates in 2013, the collection now comprises approximately 20,000 photographs from 1890 to 1995. From the beginning, the goal was clear: to create a comprehensive archive focused on Burmese photographers during and after the colonial period.

Lukas Birk is an Austrian photographer, storyteller, and publisher. His multi-disciplinary projects have been turned into films, chronicles, books, and exhibitions. A large part of Lukas’ work deals with archival material he collects through research or while delving into his own background. His narratives tackle recorded history by creating alternate storylines and fictional elements, alongside commonly accepted facts. His created ‘archival artworks’ have little to do with institutional processes but rather center around personal stories, the desire to preserve their place in history. Lukas has co-founded the Afghan Box Camera Project, SewonArtSpace in Yogyakarta, the Austro Sino Arts Program in Beijing and the initiated the Myanmar Photo Archive with a ground breaking publishing program in Yangon.