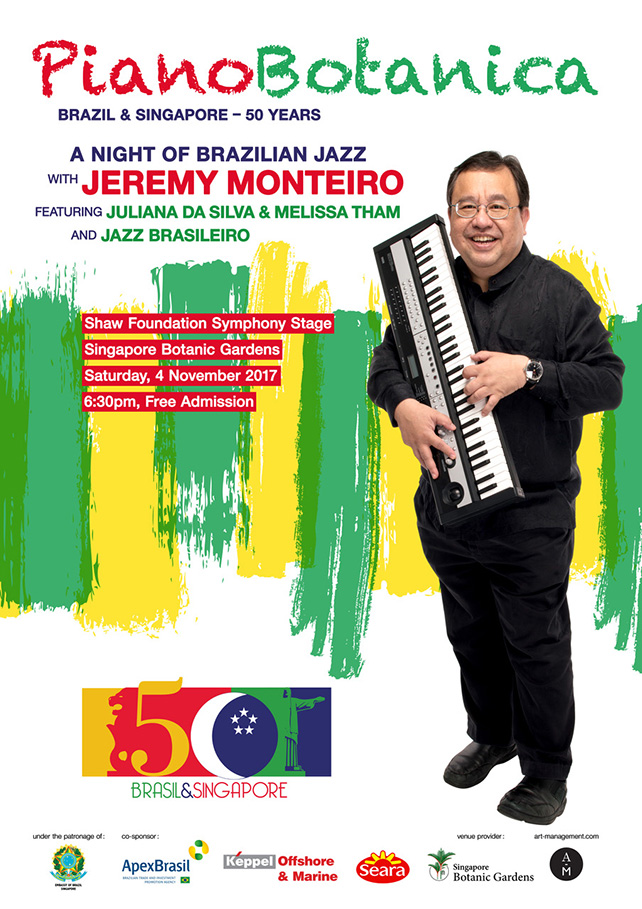 Brazil is celebrating 50 years of diplomatic relations with Singapore this year and, to mark the occasion, a special edition of PianoBotanica – the free concert-in-the-park – will take place at the Botanic Gardens on 4th November 2017. None other than Singapore Bossa Nova and Jazz Maestro Jeremy Monteiro will be playing to the delight of the audience, with guest performances by Juliana da Silva and Melissa Tham.

When asked about the significance of the event, the Ambassador of Brazil to Singapore, H.E. Flávio Damico, said, “It is a proud moment for us to commemorate this 50 years milestone with all Singaporeans and to celebrate the strong bonds between our nations. Albeit geographically apart, we hope to bring our countries closer through meaningful cultural events such as PianoBotanica. I hope the audience will feel inspired by the beauty of the music and the talent of the artists.”

Mr Ho Tong Yen, General Manager (Group Corporate Communications), Keppel Corporation, said, “Keppel is committed to supporting the arts, including making cultural performances more accessible to everyone. In partnership with the Embassy of Brazil in Singapore, we have been supporting PianoBotanica since 2014. We are delighted to do so again this year, on the 50th anniversary of the establishment of diplomatic relations between Brazil and Singapore.”

Jeremy Monteiro said, “It’s also a pleasure for us to have with us two wonderful singers, Brazilian singer Juliana da Silva from Brazil who composed the tune ‘Samba Apaixonado’ with me and Singaporean Melissa Tham who composed the song ‘Brazilian Dreams’ with me. Together with the rest of the band, I am looking forward to recreating the feeling of a Rio de Janeiro party right there at the Botanic Gardens!”

The popular annual classical music event is expected to once again draw thousands of people to the lush grounds of the first UNESCO World Heritage Site in the country. Everyone across the island is invited and encouraged to bring their own picnic mats, food and wine to bask in the lush greenery of the Botanic Gardens and enjoy the music and atmosphere to the fullest.

This concert is made possible by the Embassy of Brazil in Singapore, Apex-Brasil – Brazilian Trade and Investment Promotion Agency, Keppel Offshore & Marine and Seara.