Ping-Pong Go Round by Lee Wen 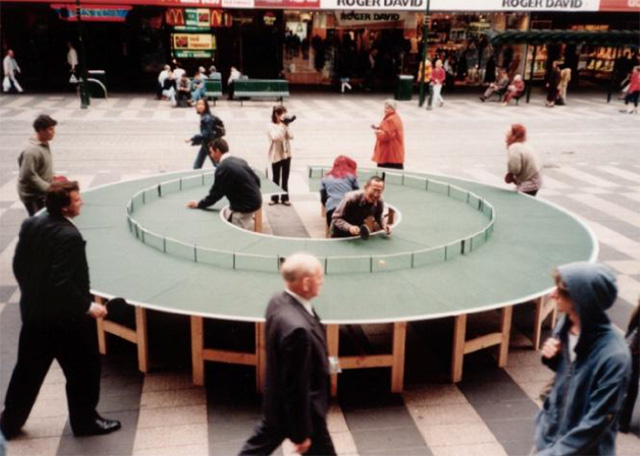 As a sport, ping pong is said to be as much a woman’s game as it is a man’s. A game commonly played in China and Singapore, ping pong requires a minimum of two players on opposite side participating in a form of dialogue as the ball bounces back and forth between them.

In this work, the structure and rules of ping pong are reinvented in the context of possibilities as the artist seeks alternative models of interaction. By reinventing the shape of a traditional ping pong table to present a version without borders, Lee Wen offers a different perception of its limitations and creates multiple possibilities for broader dialogue. As opposed to traditional, rectangular-shaped ping pong tables, Ping Pong Go-Round is at once a multi-player game and a dialogue between numerous people, regardless of gender and age around a donut-shaped table.

First enacted in April 1998 in Melbourne Australia, during international event Construction in Process VI – The Bridge, Lee Wen’s new take on ping pong has since gained attention from international media. Moreover, as Ping Pong Go-Round continues to be featured in exhibitions around the world, the work has invited and encouraged dialogue and challenge through sport and games.

Ping-Pong Go Round has also been presented in China, Singapore, Thailand and Malaysia.