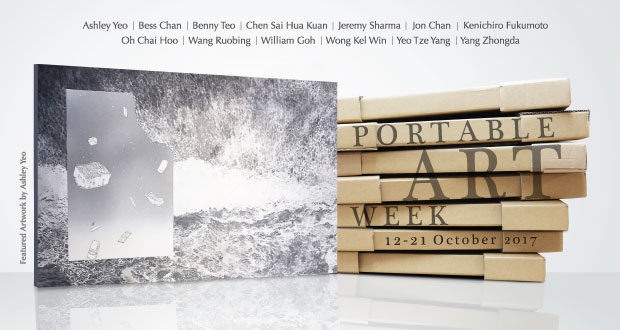 iPRECIATION presents the 4th edition of Portable Art Week. The annual group exhibition aims to be an accessible platform for those who are interested in discovering and collecting contemporary artworks from Singaporean and Asian artists. The exhibition will showcase small-sized but no less exceptional works from established and emerging artists. Spanning across a wide variety of media, the works are priced at a great value (from SGD $800-$4,800) and are suitable options for both experienced and new collectors who would like to expand or kick-start their collection of works by artists around the region. This year’s lineup will include paintings by young emerging artists Ashley Yeo, Bess Chan, Benny Teo, Jon Chan, Kenichiro Fukumoto, William Goh, Wong Kel Win, Yeo Tze Yang, Yang Zhongda and Singaporean artist Jeremy Sharma, followed by mixed media installation works by multi-disciplinary artist duo Chen Sai Hua Kuan and Wang Ruobing and ceramic sculptures by veteran artist Oh Chai Hoo.

Ashley Yeo (b. 1990, Singapore) is a Singaporean artist whose practice is founded on drawing. Her works are reflections on the epidemics of visual culture and the complexity of human conditions that stem from private thoughts and ontological questioning. Encompassing drawings, installation, sculpture and writing, she displays and deconstructs weariness and heaviness from a modern world. Within her art practice, she attempts to communicate and push forth kindness and equanimity, introducing lightness and encouraging slowness amidst the world of instant gratification and increasing pressure. She works within a construct of creating depth and curiosity. Ashley attained her Bachelor of Arts (Honours) Fine Art from LaSalle College of the Arts, Singapore with First Class Honours and completed her Master’s Degree in Fine Arts at Chelsea College of Art & Design.

Bess Chan (b. 1996, Singapore) is a final year student at Central Saint Martins, University of the Arts, London, where she is currently pursuing her Bachelor of Fine Arts (Honours). As Chan was born in Singapore, brought up in Hong Kong and educated in the UK ever since she was 14, her practice revolves around a continuous documentation of her constant shuffle between these places. Thus, her artistic interest lies in the uncertain nature of the concept of “home” and the ephemerality of contemporary life. Her paintings are drawn from momentary encounters on the streets that are archived and accumulated as photographs over time. Fragmented and distant memories are pieced together on the canvas into scenes constructed from imagination. Portraying the subtle, quiet things and fleeting moments in her immediate surroundings, the paintings essentially become visual reconstructions of the artist’s personal experiences, memories and interior states of being.

Jeremy Sharma (b. 1977, Singapore) works primarily as a painter but his body of work encompasses video, photography, drawing and installation. He obtained his Master of Art (Fine Art) at the LASALLE-SIA College of the Arts / Open University, United Kingdom in 2006, and his Bachelor of Art (Fine Art) with High Distinction from the Royal Melbourne Institute of Technology (RMIT), Australia in 2003. His solo exhibitions in Singapore includes Apropos (2012) at the Institute of Contemporary Arts Singapore, Variations (2011) at Art Forum Gallery, The Protection Paintings – Of Sensations and Superscriptions (2008) at Jendela, Esplanade and End of A Decade (2007) at The Substation Gallery. He has participated in numerous group exhibitions and residency programmes locally and overseas countries including Singapore, Malaysia, Bangladesh, Italy, England and the United States. He has received several awards, including Royal Overseas Travel Scholarship Award (2007) JCCI Arts award with art collective KYTV (2005), Studio 106 residency award (2004 Singapore), Finalist in the Philip Morris Singapore Arts Awards (2003), The Lee Foundation Study Grant (2002) and the Della Butcher Award (1999).

Jon Chan (b. 1982, Singapore) graduated with a Bachelor of Arts (First Class Honours) in 2007, and a Masters of Fine Arts from LASALLE College of the Arts, Singapore, in 2008. Chan is the winner of the 2003 and 2007 Winston Oh Travel Award. He was also the winner of the Japanese Chamber of Commerce and Industry Arts award in 2007. In 2016, he presented a series of works in “Paraphernalia”, a solo exhibition at Grey Projects, Singapore. He has also participated in group exhibitions including “Visual Rage” (Institute of Contemporary Arts, Singapore, 2007) and “Departure 2” (iPreciation Gallery, Singapore, 2016). In his body of work for this exhibition, there is a dichotomy between mediated images and how they either intrude or merge with everyday vicissitudes. He is interested in focusing on narratives without the presence of figures. By doing so, he hopes to highlight the unseen structures and borders that govern space both physically and metaphorically.

Kenichiro Fukumoto (b. 1986, Hiroshima, Japan) studied at Lasalle College of the Arts, Singapore, as an exchange student in 2013. In 2014, he graduated with a Masters of Fine Arts (Painting) from Tokyo National University of the Arts. He was also awarded the Tokyo Wonder Wall Prize and Art Award Tokyo Marunouchi in 2014. He has exhibited in solo and group exhibitions, including the “TWS Emerging – Open Call Exhibition” (Tokyo Metropolitan Government Building, 2014) and “Cross Encounters” (Japan Creative Center – Japan Embassy, Singapore, 2013). His works frequently explore self-created forms and images among the various shapes found in the realms of fine arts, industrial art, folk crafts and decorative art. Since 2013, he has been influenced by tropical plants and other elements of nature he encounters while travelling around South East Asia.

Oh Chai Hoo (b. 1960, Singapore) is a Singaporean artist who works extensively with various mediums. Since he graduated from the Nanyang Academy of Fine Arts, Singapore in 1982, he has always been dedicated to his artistic creations. Oh’s mastery of the ink brush is as well-admired as his fearless experimentation with the medium. In recent years, he has been focusing on the development of new ink techniques on rice paper. Chai Hoo’s fascination with rock structures and their natural formations underlies his series of experimental ceramic sculptures. His sculptures highlight the unique beauty of mineral structures that have been shaped over time by the accumulation of sediments. Chai Hoo’s works have been showcased at many various shows and exhibitions, including recent solo exhibitions, “Lifetime of Change” with iPreciation, Singapore (2016), as well as “Tropical Zen Garden” at Esplanade, Singapore (2014). Apart from frequent exhibitions, he has also been given recognition for his outstanding works, by being awarded the Siaw-Tao Best Artwork Award, at the Siaw-Tao Annual Art Exhibition, Singapore, 2013.

Wang Ruobing (b. 1975, Chengdu, China) was born in Chengdu, China and studied at the Nanyang Academy of Fine Arts, Singapore, where she graduated with a diploma in 1997. She went on to study at LASALLE College of the Arts (1997) and University of London (2001). In 2005, she became a citizen of Singapore and has since been based here, practising art and also taking on various projects as a curator and researcher. She later received her Doctorate degree in Philosophy of Fine Art from Oxford University in 2010, on the Ruskin scholarship, and Lamb and Flag scholarships. From 2011 to 2014, she worked at the National Gallery Singapore as a curator and is currently lecturing at LASALLE College of the Arts. Wang adopts diverse methods in the process of her projects, of which comprises installation, sculpture, photograph and video. Her work challenges and explores ways of seeing, often disrupting perception and highlighting the anthropological nature of her subjects. She has participated in several solo and group exhibitions, including “Over the Horizon”(2016, The Concourse, Esplanade – Theatres on the Bay, Singapore), “#TransActing: A Market of Values” (2015, Chelsea College of Arts, London, UK), “Follies for è birds”, (2014, National Museum, Singapore), “The Earthly World” (2010, The Ruskin School of Drawing and Fine Art and The Dolphin Gallery, UK), “EVA International” (2010, Limerick, Ireland), “Green For Something” (2010, Mora Gallery, Bucharest, Romania, 2010), “Perfect Forest – Seeded II” (2004, The Substation Gallery, Singapore), “Seeded I” (1999, The Substation Gallery, Singapore).

William Goh Jian Hong (b. 1992, Singapore) is a visual artist who works with a range of media including oil and acrylic painting, sculpture, drawing and mixed media. He is currently pursuing his studies in Art Education at the National Institute of Education (Singapore) and holds a Diploma in Art Teaching from the Nanyang Academy of Fine Arts (Singapore). Goh has been a member of both the Modern Art Society (Singapore) and the Singapore Watercolor Society since 2016. He has attended various art and academic symposiums and workshops in Asia. His work has been exhibited both locally and internationally, including the “Fleuve De Vie, River of Life – Group Exhibition”, Society Kentridge Guild House Gallery, National University Singapore (2016) and “Baum des Lebens: Trajectory of Civilisation, Nanyang Academy of Fine Arts, Singapore (2016).

Wong Kel Win (b. 1989, Singapore) is a contemporary Singaporean artist. A recipient of the Future Leadership Scholarship (2013), Wong holds a Bachelor Degree (Honours) in Fine Arts at LASALLE College of the Arts, Singapore-Goldsmiths, University of London. Wong works in fine arts media – painting, printmaking and drawing as well as what is conventionally considered commercial media – digital drawings. Known for his sardonic wit and humour, Wong’s artworks contain elements of satire that mainly highlight conflicts, worldly issues and confrontations he faces in life. Challenging the contemporary world through his alter-ego, he frequently employs a comical approach to articulate illustrations in his mind and feelings of his heart. Wong has exhibited locally and internationally, including shows at Esplanade (“Commoners” – Solo Exhibition, 2017, Singapore), ION Art Gallery (“At Source 根源 ” The Young Talent Programme 2014/15 Winners’ Solo Exhibition, Singapore), Sabanci University, Turkey (2010), the Singapore Printmaking Society 29th Annual Exhibition (2009), and the Pocket Films Festival, Japan (2007).

Yeo Tze Yang’s (b. 1994, Singapore) works often depict the unnoticed and by-passed places and objects of his immediate surroundings. Avoiding contemporary conceptual approaches to art, he instead reverts back to a more direct and emotive artistic direction. He believes in the unity of life and art, and envisions his works to be able to speak for themselves and resonate with viewers of any background. The result of such a process is an accumulation of images, thoughts, emotions, stories and memories that in turn become allegories of his life. Yeo is currently pursuing his Bachelor’s Degree in Southeast Asian Studies at the National University of Singapore. He was awarded the Silver Prize under the Established Artist Category for the UOB Painting of the Year competition in 2016. His first solo exhibition, A Place Behind My Eyes, was held at ION Art Gallery in 2015. Yeo’s works have also been exhibited in venues including Goodman Arts Centre (Singapore), Institute of Contemporary Art (Lasalle College of the Arts, Singapore), Art Apart Fair and the Affordable Art Fair. His works are part of private collections in Singapore, Australia, the UK and the USA.

Yang Zhongda (b. 1988, Singapore) believes that a strong technical facility and sincerity is the foundation of all good artworks. He studies Western Painting at the Nanyang Academy of Fine Arts, Singapore (2014 – present). He has exhibited in group exhibitions and art fairs including “Affordable Art Fair” (Singapore, 2013), “Expression” (Dahlia Gallery, Singapore, 2012) and “Primeval: A Group Exhibiton” (Goodman Arts Centre, Singapore, 2012). Zhongda’s paintings serve as a visual response to the evanescence and growing nihilism of our time. Beginning from abandoned places, prosaic objects, and decrepit memories, he re-constructs these forgotten or neglected visuals as a means to record and reaffirm their existence and also his own. This visual diary answers a subconscious need to see meaning in daily life, of his relationship to the subjects, and his identity in relation to society. Working primarily in monochrome, he aims to eternalize transitory fragments of memories and effect intimate personal emotions and nostalgia. Through this context of documentation, preservation, and celebration of these moments, it is his wish that viewers would be momentarily transported via the paintings to re-examine and appreciate similar moments in their lives.