Practising habits of the day 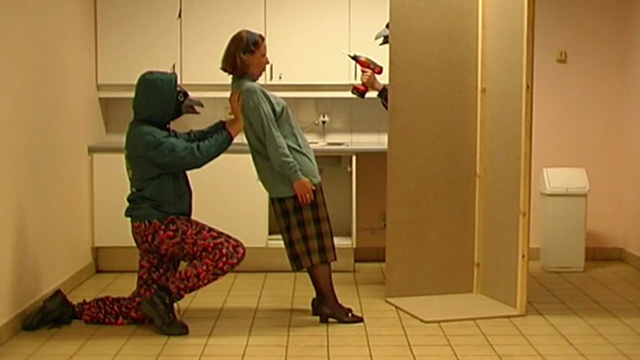 Practising habits of the day examines the relationship between forms of behaviour and artistic production. The artists brought together in this exhibition engage with daily gestures and routines as artistic material, but also as a constitutive force in the process of art-making. The exhibition explores how certain attitudes to ways of working, ways of seeing and practices of display are formed and solidified in time as norms and conventions. From the personal realm to the studio, from the studio to the institution, how do artists and curators navigate the habitual?

Turner Prize winner Laure Prouvost’s immersive video installation It, heat, hit (2010) overturns the conventions of filmic language, testing the limits of viewers’ perception through rapid and aggressive juxtapositions of text and image. In their early video work, The bucket (2001), the artist duo Jos de Gruyter & Harald Thys stages domestic scenes that slip into the banal and absurd. In the video series, Exercise now and fit a standard size coffin later (2013), Kray Chen produces a grammar of gestures appropriating exercise routines to reflect on how habits are formed and embedded in the memory of a body and of a nation. Latifa Echakhch’s large-scale wall installation Plaintes (2009), a defacement of the gallery space, is based on Le Corbusier’s Modulor scale of proportions. It articulates a contradiction of Modernist aspiration where elegant housing units turned out to be claustrophobic environments. Gary-Ross Pastrana’s artistic process of breaking and recombining elements is performed in a reiteration of his previous object-based work 99% (2014), while a new work produced in response to the framework of the current exhibition engages with common habits. In A very fragile, will? (2015), Tiên Thủy Nguyễn practices intimacy in an attempt to live her art; her investigations of relationships translate into objects and fiction writing, which aim to preserve the memory of her close encounters.