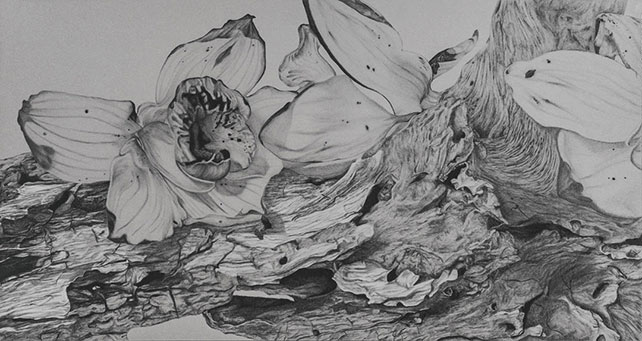 Process is a group exhibition of young Singaporean artists. Process consists of four promising young artists: Liu Ling, Justin Lim, Tracy Tan, and Alessia Levonique Candra. In this body of works, the artists explore the process of painting and art-making whereby they set out from different distinct paths but converge to the same destination and yet retain their unique visual style.

The celebration of reality is the anchor of Liu Ling’s works. Through the process of interpretation in what she sees, she attempts to rediscover the essence of beauty; especially in the ordinary, ignored, and the forgotten. Although the experimentations in her body of works often lead Liu to different mediums, her works always adopt the same language of realism. The most significant challenge is neither the skill nor the patience in the execution of her works, but the honesty to fully embrace reality with all its imperfection.

STILLS is a landscape photography series developed by Tracy Tan. Spontaneity and stillness are the principals in these works. The stillness and solitude that she finds herself in, during the seclusion while searching for peacefulness are reflected through the collectives. Through this solitude, she shares with her viewers the state of calmness as she experienced it.

Alessia Levonique Candra approaches her artworks by alchemy from the beginning to the finishing. Candra considers herself a purist when it comes to her painting process. She works with powder pigments, mixing them to get the desired colours, applying them directly on the canvas without any visual aid such as projector as a guide. She strives to let her art speaks for itself and transcend its deceptive appearance to evoke senses,  thus affects one’s body to the point where it ends any aesthetic contemplation.