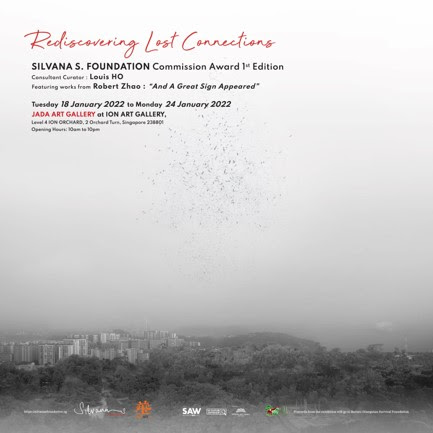 Zhao was the winner of the inaugural Silvana S Foundation Commission Award in 2020, organized by the foundation in collaboration with the Singapore International Photography Festival. Zhao won for his proposed series, And A Great Sign Appeared, which looks at the effects of urbanization on the natural ecosystem, particularly avian colonies in Singapore. During the pandemic, Zhao became even more keenly aware of the proximity of his non-human neighbours in Singapore’s densely urban environment. The present series of work captures the dramatic and mundane encounters he had during this period, and reflects the myriad connections between human and wildlife populations in Southeast Asia.

His work is presented alongside that of the late Silvana Sutanto. The exhibition includes Indonesian-born photographer Sutanto’s images of animal populations, anthropocenic landscapes and celestial phenomena. Sutanto’s practice was centered on her personal passion for the natural environment, which saw her travelling to remote regions of the world, such as Kenya, Papua New Guinea and Alaska, in her fearless pursuit of the perfect shot.