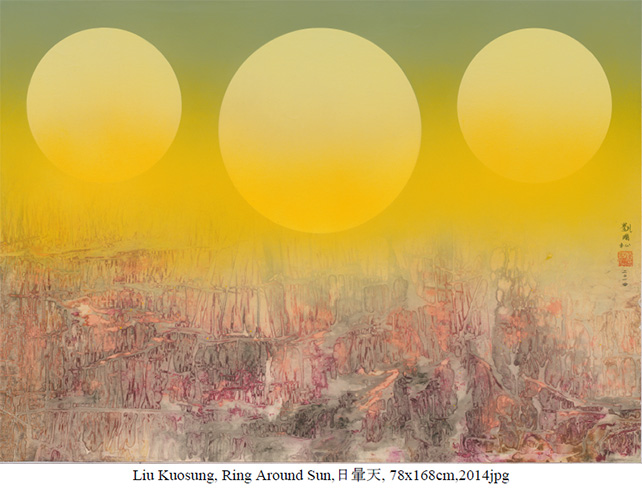 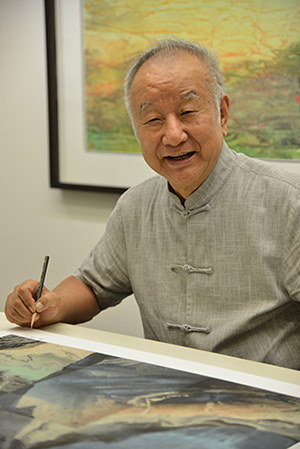 Liu Kuo-Sung (1932) was born in Shandong, China. He graduated from Taiwan Normal University in 1956. Liu Kuo-Sung achieved many breakthroughs and revealed a constant pursuit of changes in his artistic career. He founded the Fifth Moon Group and initiated a trend of modernist art in Taiwan. During the early stages of the Republic of China, His slogan at that time was “Modernization of Chinese Painting”, he aimed to begin a revolution of Chinese painting and establish a new tradition for Chinese painting in the 20th century. Liu’s fusion of ancient Chinese ink painting makes flexible use of multivariate techniques and his new style of “Modern Chinese Ink painting” made him the most renowned artist of contemporary ink.

As the father of “Modern Ink Painting” and the pioneer of “Modern Chinese Painting”, Liu has made great contribution to modern ink painting. In this exhibition, he formed a new ink and wash symbol system, turning away from the traditional “Rthetoric of the Line” that emphasized the black lines to express what he called “Tension of the White Line”. Most of the lines in his paintings are white lines on black mountains or black rocks – all of which has symbolic meaning – in a “white for objects, black for background” mode. In his latest series, the combination of techniques for water and sun/moon has achieved the highest peak in his artistic career. All the inventions and techniques expressed comprehensively in one.

The exhibition will tour four art museums across Asia, starting at National History museum of Taiwan, then MoCA@Loewen, Singapore and National Museum of Jakarta, to Kuala Lumpur in Malaysia. Up to date, this exhibition is considered the largest show of Liu Kuo-Sung. The exhibition consists over 80 masterpieces of his recent artworks. The exhibition will bring the revolutionary ink painting experience to collectors and art enthusiasts. The exhibition, organized by Linda Gallery Singapore, is free to the public.

By: School of the Arts Singapore (SOTA)