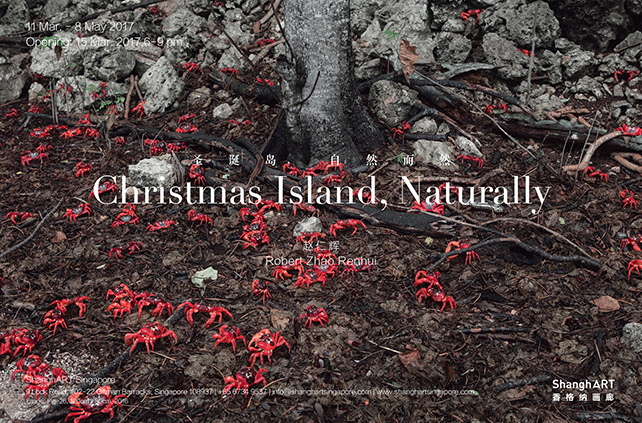 “Christmas Island, Naturally” is a solo show by acclaimed Singapore artist and photographer Robert Zhao Renhui. on view from 11 March through 8 May. The exhibition comprises works commissioned for and exhibited at the Sydney Biennale 2016 and marks the debut of these works in Singapore, as well as showcasing previously unexhibited works in the series. The opening reception will be held Wednesday, 15 March 2017, from 6-9pm, including an artist’s talk and exhibition book launch.

Under his Institute of Critical Zoologists (ICZ), devoted to a “critical approach toward the zoological gaze, or how humans view animals” and to “advance unconventional, even radical, means of understanding human and animal relations,” the artist’s multi-disciplinary approach appropriates scientific language, tools, methods and even apparatus, juxtaposed with fabulist storytelling. His works inhabit an uncanny space between reality and fantasy, often exposing overlooked contradictions, assumptions, and tensions inherent in man’s relationship with nature. Blending fact and fiction, truth and artifice, the artist invites viewers to contemplate upon the image and information being presented, a reflexive gesture that proves to be particularly pertinent in an image-saturated world of “fake news.” And sometimes, as the artist demonstrates, truth is in fact stranger than fiction.

The artist conducted a research residency on Christmas Island between 2015-2016. A small volcanic outcrop in the Indian Ocean, the island’s geographic isolation has resulted in its endemic biodiversity. Once part of the Crown Colony of Singapore, the island is now an External Territory of Australia. Christmas Island is best known for its annual breeding migration of red land crabs from land to the sea, during which millions of bright red crustaceans overtake the island and all vehicular activity grinds to a halt. Phosphate mining, the island’s main industry, began in the late nineteenth century, and invasive species brought over by human settlers have tipped the scales of the island’s fragile ecological balance, driving multiple native species to extinction and threatening others. Conservation efforts include an island-wide culling of non-native cats, to which the island’s native fauna had fallen easy prey.

The artist’s study focuses on documenting the island’s imperiled and extinct species, and also examines the unintended consequences of man’s presence. The artist’s photographic series of the island’s strange creatures, natural phenomena and landmarks are accompanied by signature pseudo-scientific, tongue-in-cheek exposition and field notes. In addition, the artist references objects from the island for two installations on view. Memorial to the Christmas Island Pipistrelle (2016) is a solar-powered ultrasonic echolocator used to track the pipistrelle bat. Rendered meaningless due to the species’ extinction, the apparatus serves as silent, poignant reminder of the pipistrelle’s permanent absence. The elegant wooden form of Memorial to the Last Cat on Christmas Island (2016) belies its lethal function as a feral cat trap, indicated by its pointed installation together with a resin cat skeleton.

“Christmas Island, Naturally” culminates in a speculative solution to remove all invasive species from the island once and for all, whereby humans, also proverbial “invasive species”, opt to leave the island in order to preserve its ecology. This imagined scenario unfolds via a fictive conservation conference program, “Life After Humans – Rewilding Island Ecosystems,” as well as extracts from scientific papers presented.

Accompanying the exhibition, the titular book, Christmas Island, Naturally, a book imagines the result of this thought experiment fifty years into the future, containing 120 photographs and documents on the extinctions and conservation efforts on the island. The book will be launched during the opening reception following an artist’s talk. Limited copies of the book will also be available for purchase.