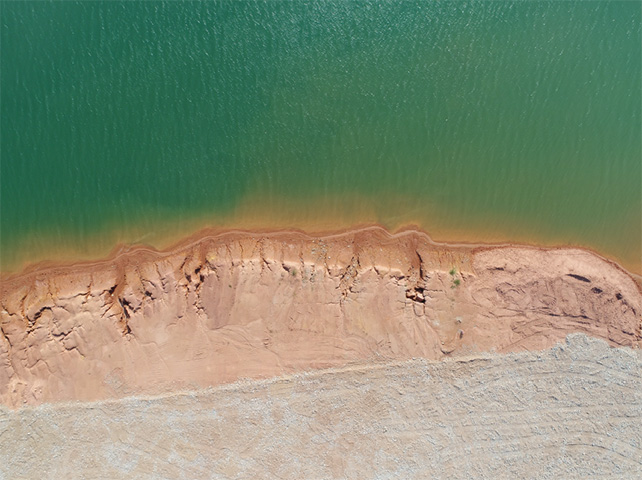 Future Perfect presents SEA STATE 9: Proclamation, an exhibition of new works by the acclaimed Singaporean artist, Charles Lim. The show comprises a selection of new pieces from the final chapter of Lim’s celebrated SEA STATE project (initiated in 2005), revealing the very concrete process of nation-building, and its very abstract foundations.

Charles Lim’s SEA STATE examines the complex understandings of sea and land in the island city-state. With its impressive, hyper-urban edifice, Singapore defines itself by its ability to overcome environmental constraints. Its often bold solutions are potent symbols of the nation’s aspirations, placing it at the forefront of pressing debates around the use of resources, environmental change and territorial sovereignty.

Unlike any other country, Singapore is literally a work-in-progress. Since gaining independence in 1965, it has grown by around 30 percent through an epic, state-led land reclamation initiative.
Whereas in most nations, claims to belonging may be based on the fixed, physical reality of ‘the land,’ Singapore’s territorial appeals concern a space that is liquid and abstract. The nation’s
landscape is continuously refreshed, along with the past and the future it imagines. Lim’s SEA STATE is a critical index of this process. The project’s early stages studied the dynamic coastal
ecology all but effaced by intensive industrial use. More recent iterations, such as the artist’s Singapore Pavilion at the 2015 Venice Biennale, have examined the geometry and awesome scale
of this total national sculpture.

Lim’s latest offering, SEA STATE 9: Proclamation, stems from his research into the process by which new land comes into being. Under the colonial Foreshores Act – revised in the 1980s to
facilitate Singapore’s rapid expansion – the head of state has the authority to transform maritime space into terra firma. Lim zeroes in on this mundane yet magical procedure by which sea
becomes land and abstract space becomes concrete nation, locating the seams between the legal reality and a more plastic, physical one.