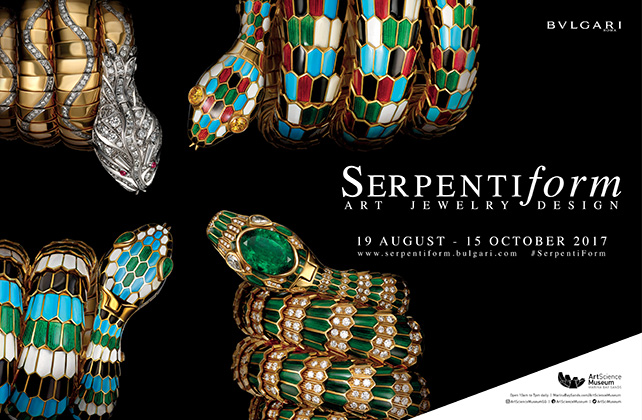 The exhibition SerpentiForm features the many creative forms that the snake has taken in the worlds of art, jewellery and design, and is curated by the Bulgari Brand and Heritage Curator Lucia Boscaini and by the Maison’s Brand Heritage Department.

Epitomising seduction, rebirth and transformation, the snake as a symbol has been intertwined for centuries with the story of mankind, capturing the imagination from East to West. Ever since antiquity, the creature’s ability to renew itself by changing skin, to remain in contact with the earth and at the same time rise above it, to sinuously coil itself up, or to defeat threatening predators, has fed myths and legends inspiring artists in many fields. Endowed with wisdom and magical qualities, snakes were viewed as guardians, emissaries and often as gods in their own right, as well as feared and respected for their potential to be dangerous and destructive.

During the 1940s, Bulgari captured the expressive power of such an evocative symbol, reinterpreting it for the first time in jewellery with supple bracelet-watches that over the decades established themselves as true icons of its bold creativity.

Paying tribute to a motif that has contributed to increasing the Maison’s international fame, Bulgari offers an eclectic and evocative itinerary that unfolds from the antiquity until today, narrating how the snake has also inspired many important names in modern and contemporary art, design, fashion, decorative arts and photography.

Precious antiquities from East and West examine the different symbolic meaning of the snakes in various myths and legends: a statue of a young Hercules strangling the snakes from 2nd century AD and apotropaic snake jewels from Ancient Rome, 4th century BC will convey the ambivalent meanings of the animal: menace and protection. Similarly, a Buddha protected by a Naga snake from early 12th century and Chinese statues of guardians – divinities protecting the tombs from snakes dating back to 2nd to 6th century AD will express the sense of attraction and fear that the snakes have always stirred.

The exhibition is also enriched by costumes from prestigious theatre and cinema archives and by delightful vintage evening dresses by the best Italian fashion designers: the snake thus becomes an eccentric weapon with which to fascinate, play, or add extra charisma to a character.