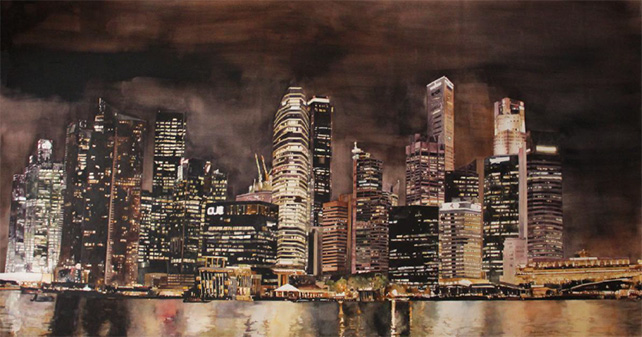 Advancing from his first solo exhibition Moments in Spaces in 2013, Shifting Points delves into the varied dimensions of livedness and consumerism. The exhibition will be officially opened by Mr. Ong Yew Huat (Chairman, National Heritage Board) on 7 March 2015, Friday, at 3pm.

Deploying an intricate pictorial language steeped in transition browns and grays, several works from this series encapsulate the spatial-temporal rhythm of urban city life with its ubiquitous neon signs, larger-than-life billboards, sleepless city streets and resplendent store interiors. In other instances, Kwan Yuen serves a juxtaposing slice of life by shifting the focus to neglected objects existing on the peripheral or countryside scenes suffused with natural sunlight and peaceful simplicity.

Born in Hong Kong in 1986, Tam Kwan Yuen grew up in Singapore where he has been active in the local art scene since his youth. Upon graduating with a Bachelor of Fine Arts Degree from Nanyang Technological University in 2012, he made the bold decision to embark on a full-time art career. His choice of subject matter and colour palette stands out as a breath of fresh air from the watercolour scenes that we typically expect from most local watercolour artists.

Currently a member of the Singapore Watercolour Society and a Signature Member of the Canadian Society of Painters in Watercolour (CSPWC), Kwan Yuen’s paintings have been regularly selected for international juried shows and have bagged several awards, including the ‘Third Place Award’ in the 34th International Exhibition of Pennsylvania Watercolor Society and the ‘Award of Distinction’ in the 2014 Watermedia Showcase of the Missouri Watercolor Society. His works have also been featured in art publications such as the 17th Issue of the Art of Watercolor Magazine – an artist’s magazine for watercolor artists around the world. Within the span of his young two-year career, Kwan Yuen’s watercolours have been exhibited in United States, Canada, Belgium, Greece, Hong Kong and Singapore.