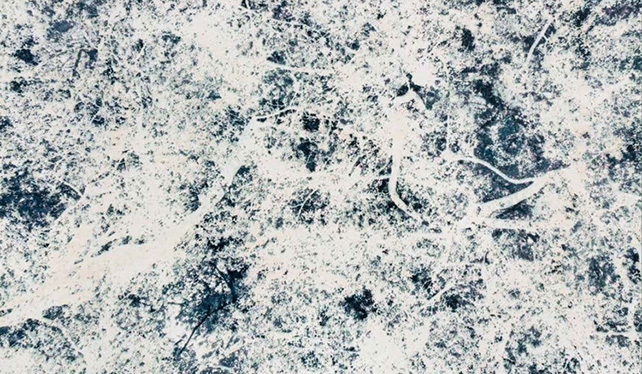 In a poetic series of ‘tablets’ bearing the same title The River Is Within Us, Houshiary combined thin layers of handmade paper with perspex that illuminate a single word selected from the Hebrew, Sanskrit, Arabic, Mandarin and Latin languages; their colours reflect emotional states and respective nationalities. “One of my interests is in words, their use in the visual arts, and the fact that all cultures have tried to preserve the word,” says Houshiary. According to writer and critic Sue Hubbard, “language is what connects us to civilization and to the wider universe. We speak, therefore we are. It defines us as sentient, imaginative beings.”

Text has been employed by Houshiary here as a means to “capture breath”, symbolic of one’s “own existence, transcending name, nationality and cultures.” Subtle yet radiant in appearance, the ‘tablets’ evoke light emanating from the computer screen, which for Houshiary “has become the paper for the next generation”.

This focus on layers of history, evolution and the root that binds humanity are concepts that are also explored in her indigo etching works titled Migrants, which features general viewpoints of foliage that was taken in Singapore during her residency. Just as the image suggests a view from both the top and bottom of the tree, not as a fixed defined point of view, Houshiary challenges our perception of migration, and on the wider whole, culture and civilization, highlighting its fluid, organic nature simply with no centre and boundaries. It is as Hubbard writes, “a visual and physical world without borders.”

Given their abstract quality, this body of work will stir the senses, and encourage viewers to feel rather than analyze and comprehend.