Singapore Writers Festival 2019: A Language of Our Own 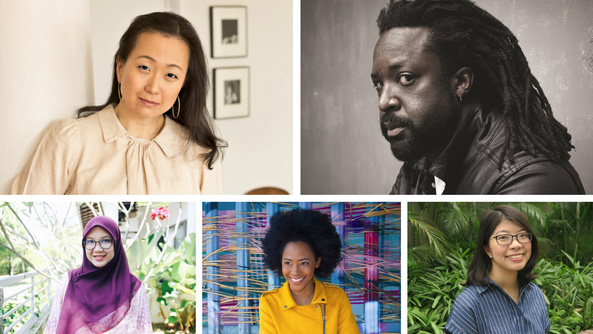 The Singapore Writers Festival (SWF) ushers in a new chapter in its 22nd edition with poet Pooja Nansi making her debut as Festival Director. The festival, themed A Language of Our Own, will explore the role of language in the expression of identities and formation of communities in the 21st century. Prominent authors headlining the festival include Min Jin Lee (Korea – US), author of Pachinko, a 2017 finalist for the National Book Award for Fiction, and Marlon James (Jamaica), winner of the 2015 Man Booker prize for his novel A Brief History of Seven Killings. Organised by the National Arts Council (NAC), SWF will be held in the Civic District from 1 to 10 November 2019.

This year, SWF will be extending its reach to youths aged 13 – 18 through a new festival track – the SWF Youth Fringe – as part of the Council’s efforts to nurture early engagement with the literary arts. Jointly organised with the Singapore Book Council, the SWF Youth Fringe will be curated by a panel of Youth Curators from a number of schools including Temasek Junior College and Nanyang Academy of Fine Arts. The programme includes the discussion of topics and genres youth are interested in such as YA fiction, K-pop, zine-making, memes and text-speak as a language, and will be headlined by Nicola Yoon (Jamaica – US), a New York Times-bestselling author whose Young Adult (YA) novels The Sun is Also a Star and Everything, Everything have been adapted into movies.

Other authors participating in the Youth Fringe include editor, author and screenwriter Nikesh Shukla (UK), Hanna Alkaf (Malaysia) and editor-at-large at Fleurs Des Lettres Wong Yi (Hong Kong). In line with the SWF Youth Fringe, the festival will also be introducing the SWF Youth Pass, a festival pass for youth audiences. Pass holders will be able to attend more than 100 events ranging from panel discussions and mini-lectures to exhibitions and author readings. They will also get the opportunity to meet authors such as Min Jin Lee (Korea – US), poet and Young People’s Laureate for London Theresa Lola (Nigeria – UK), and Young Adult novelist Hanna Alkaf (Malaysia).

A Language of Our Own seeks to examine the role of languages in identity-formation and community-making in today’s increasingly globalised and fractured world. Through SWF’s thoughtfully-curated programmes, the audience is invited to reflect on the function of languages, and how they examine the socio-cultural status quo so as to create a more inclusive society. The theme will also explore the evolution of languages, for the audience to gain a better appreciation of linguistic anthropology, how this evolution in languages have influenced our social lives and glean insights on how societies might communicate in the future.

This year’s festival will also discuss Singlish – the unifying lingua franca for Singaporeans from all walks of life. There will be conversations around topics such as the most versatile Singlish word and a series of mini-lectures titled “The Words We Love” celebrating the everyday vernacular of Singaporeans. As one of the few multi-lingual literary festivals in the world SWF will also feature cross-cultural programmes. Festival-goers can expect a variety of events that showcase the diversity of languages in our community, such as “Perang Spontan”, a Dikir Barat x rap battle performance; the return of “Translation Circle:Live!”, a live translating session which demonstrates the gamut of challenges faced in translating across languages and cultures; as well as a calligraphy panel and tour.