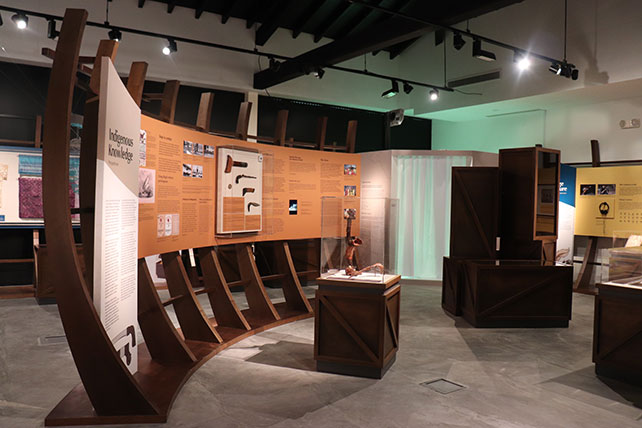 19th century Singapore – already a bustling trade hub, a Bugis merchant, a seasoned traveller of the region, steps off a phinisi (a traditional Bugis sailing ship), bringing with him an intricately wrought brass chest, complete with vanity compartments, and filled with items such as valuable jewellery. Some of these would be traded or sold, and leave Singapore shores; others would remain here, surviving as treasured objects and family heirlooms until today. These serve as some of the visible reminders of the proud legacy of the Bugis people, and through the stories and memories they hold, tell the tales of one of the earliest seafaring traders to Singapore, whose history is inter-twined with Singapore’s narrative as a port city.

This year, the Malay Heritage Centre (MHC) turns the spotlight on the heritage and culture of the Bugis community in their special exhibition, Sirri na Pesse: Navigating Bugis Identities in Singapore. The exhibition relates little-known stories of the Bugis people in Singapore, as well as the unique traditions that journeyed with them from their ancestral homeland in South Sulawesi, and how they are manifested in the modern context of Singapore today. Meanwhile, the annual Malay CultureFest 2017 will not only bring Bugis culture to life, but also showcase various aspects of the intangible cultural heritage of the Singapore Malay community through cultural performances and programmes.