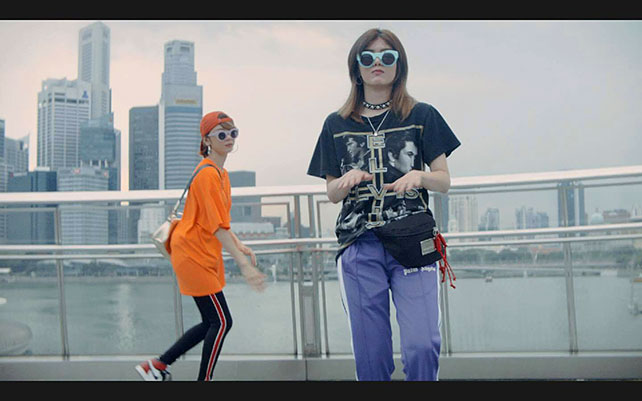 Specters and Tourists is a moving image exhibition by Japanese filmmaker and artist, Daisuke Miyazaki, from 11 November to 17 December, in conjunction with this year’s Singapore International Film Festival (SGIFF).

Seen through the eyes of Miyazaki, Specters and Tourists is a two-part film installation commissioned by ArtScience Museum and SGIFF that depicts urban life, and scenes from Singapore. The isolation and anxiety of modern life is depicted in the first part of the experience, Specters, whilst Tourists reveals the temporary freedom that the protagonists experience in the absence of technology.

In Specters, scenes from Miyazaki’s previous films are weaved into a multiple-screen spectacle of people trapped like ghosts, or specters. Miyazaki lingers on the observation that the modern experience is homogenised and without meaning; without risk and thoroughly monotonous. As one peers into the windows of their uninspired lives, the spectator becomes the specter himself.

The accompanying installation is Tourists, which was filmed in Singapore. It stars Japanese actresses, Nina Endo (who starred in Miyazaki’s Yamato (California), which was screened at the 27th SGIFF) and Sumire Sato (from Japanese girl group, SKE48). In Tourists, two friends win a free trip abroad. They arrive in a cosmopolitan city identical to their home country, but find themselves displaced in its unfamiliar monuments when one of them loses her mobile phone. Without the predictability of a travel itinerary found on the Internet, the friends reconstruct their identities with their encounters in unwritten places.

Born in Yokohama, Japan in 1980, Miyazaki is the director of Yamato (California), which screened at SGIFF in 2016. He is also one of the Berlinale Talents directors of the omnibus film, 5 to 9, which screened at SGIFF in 2015. Miyazaki’s first feature film, End of the Night, was selected for numerous international film festivals and won the Special Mention Prize at the Toronto Shinsedai Cinema Festival.

Specters and Tourists is part of Marina Bay Sands’ ongoing extended collaboration as a Presenting Sponsor of the SGIFF. It sees ArtScience Museum and SGIFF collaborating to inspire audiences beyond the main film festival by exploring new spaces for the discovery of art, film and the moving image.

Admission to Specters and Tourists, and the programmes that accompany it, is free.