Take Care of Me by Susie Wong 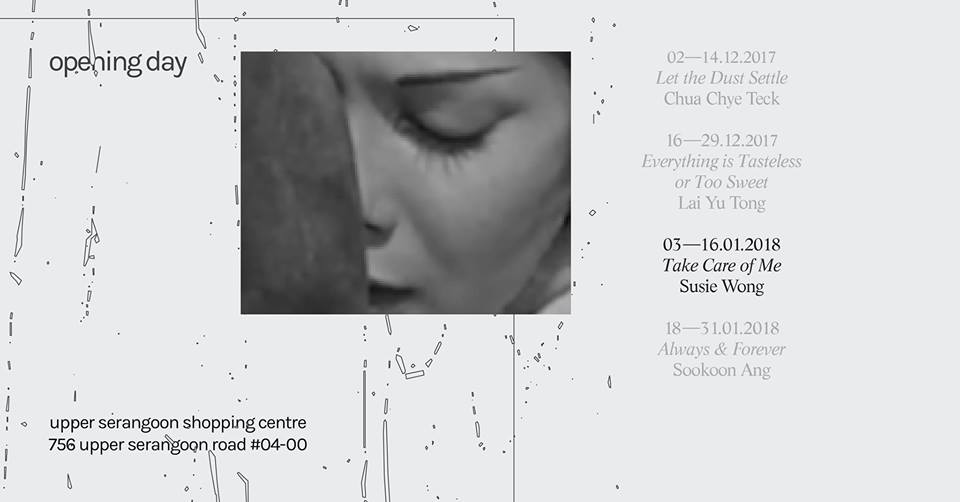 Susie Wong began her arts practice in the late 1980s, in painting and arts writing, and later complementing it with teaching, and curatorial projects. Her works comprise figurative paintings, drawings, and installations. She had also developed time-based works in mixed media and video installations. Central to her current works is the inquiry of the photograph as medium that mediates between memory and loss, between documentation and nostalgia. Her works had been shown in exhibitions such as Trace held at The Substation in 2008, which travelled to Valentine Willie FA Gallery, KL; My Beautiful Indies, and After Image, held respectively at The Esplanade at the end of 2013, and Space Cottonseed, Gillman Barracks, 2014.

opening day is a four-part series of artistic interventions housed in the common space on the top floor of Upper Serangoon Shopping Centre (USSC) from 2 December 2017 to 31 January 2018. Titled after local poet Arthur Yap’s poem which describes the new urbane sensations created by the construction of a new building in the 1970s, the poem acts as a foil for the weathered state of the site. Jointly organized by Selene Yap and Cheng Jia Yun, opening day will feature the responses of artists Chua Chye Teck, Lai Yu Tong, Susie Wong and Sookoon Ang.