The Making of an Institution 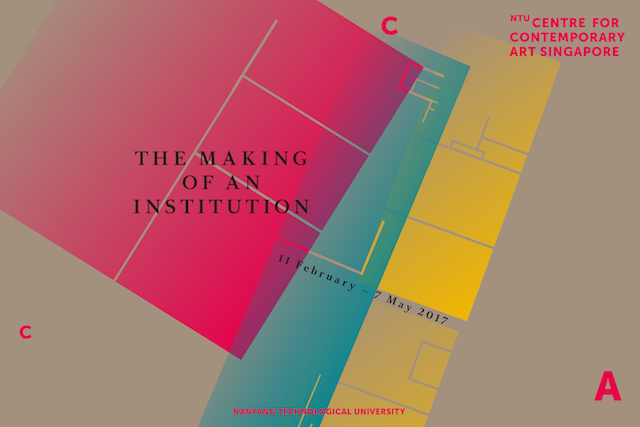 Established in 2013, the NTU Centre for Contemporary Art Singapore (NTU CCA Singapore) embodies the complexity of a contemporary art institution in times of knowledge economy and global art. The role of a contemporary art institution should not be limited to the presentation of art. It feeds off and nurtures the cultural ecosystem it belongs to through a complex series of actions that often reside in the realm of the immaterial. The Centre’s inaugural programme Free Jazz addressed the foundational question “What can this institution be?” highlighting the skill of improvisation and free play. Three years later, different questions are to be raised: What could the role of the NTU CCA Singapore be for the years to come within a fast changing local, regional, and global cultural landscape? What are the criteria to evaluate its achievements and impact?

The Making of an Institution captures different moments in the development of the Centre connecting artistic projects, discursive manifestations, and the institutional apparatus in a seamless display. It looks back into its young past in order to shape its future. Challenging the format of an exhibition, The Making of an Institution creates a communal space where projects and research explorations by the Centre’s Artists-, Curators-in-Residence, and Research Fellows coexist with ongoing series of talks, screenings, performances, and workshops. The project engages the Centre’s main pillars­–Exhibitions, Residencies, Research and Academic Education)–bringing to a close the overarching curatorial narrative Place.Labour.Capital. that served as a framework for its activities since  2013.

In revisiting its own process of institutional building, NTU CCA Singapore appropriates the format and language of a “public report”. While a public report is conventionally employed to deliver an official written narrative, the Centre’s report unfolds in the exhibition space through the languages of the performative, the discursive, and the archival.

The Making of an Institution is divided into four sections borrowed from the structure of a public report: Reason to Exist: The Director’s Review; Ownership, Development, and Aspirations; Artistic Research; and Communication and Mediation. The first section, Reason to Exist: The Director’s Review maps out a network of institutions, like NTU CCA Singapore, that place research at the core of their identity. Each guest director will closely examine the vision, mission, and operative model of her respective organisation in a series of talks aimed at deepening our understanding of the changing role of contemporary cultural institutions. Ownership, Development, and Aspirations is a public panel with several members of the NTU CCA Singapore’s International Advisory Board and  its stakeholders representatives that stresses the importance of feedback and exchange among peers especially in the development phase of an institution. The section dedicated to Artistic Research frames the material and immaterial aspects that constitute contemporary art practices. It takes over the Centre’s physical Spaces of the Curatorial—The Exhibition Hall, The Single Screen, The Lab, and The Vitrine—juxtaposing artworks and research projects by NTU CCA Singapore’s Artists-, Curators-in-Residence, and Research Fellows alongside various formats of public programming. Finally, Communication and Mediation explores the production of an institution’s identity through visual communication and spatial practices. Through workshops and presentations, artists, architects, and designers will discuss how they create diverse visual and spatial identities for art institutions.

The public report will culminate into a book planned for publication in May 2017, gathering the voices of all the artists, curators, researchers, and academics who have contributed to the making of the institution.

The Making of an Institution is curated by Ute Meta Bauer, Anna Lovecchio, Curator, Residencies, and Anca Rujoiu, Manager, Publications.