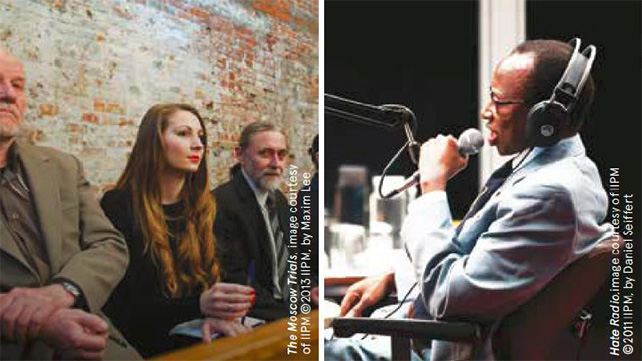 In the summer of 2012, when the punk activists of Pussy Riot were controversially sentenced to two years’ imprisonment in a penal colony, director Milo Rau staged a counter-event drawing on the techniques of political theatre. From March 1 to 3, 2013, a courtroom was set up at the Moscow Sakharov Center to provide a stage for a ‘show’ trial that pitted the different sides of the cultural war waged in Russia against one another. However, the people on stage were from real life: artists, politicians, church leaders, lawyers, a judge and a jury composed of seven Moscow citizens. The three-day trial, which was stormed by the Russian authorities, led to a travel ban for Rau. This film The Moscow Trials documents the live event that occurred in Moscow.

The theatre project Hate Radio focused on the role of the broadcasting station Radio Télévision Libre des Mille Collines (RTLMC) in generating racial hatred during Rwanda’s 1994 genocide. Hate Radio returns RTLMC to the airwaves in a reconstructed backdrop. How racism functions and how human beings are ‘talked out of’ their humanity – this documentary attempts to provide some of the context of this tumultuous time.