The Nude in Art: A leading subject in Art History 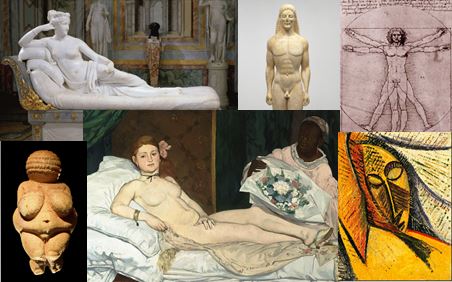 Nude figures, as old as art itself, appear in the art of most cultures, but are particular present in the history of Western Art.

This two-session series will trace the portrayal of the nude body during the course of history from Classical times through the Renaissance and the Neoclassical to Modern Era.

Artworks/artists featured include Venus of Willendorf, Venus de Milo, The Birth of Venus by Botticelli, Venus Victrix by Canova, The Turkish Bath by Ingres, Olympia by Manet, The Young Ladies of Avignon by Picasso, The Nude descending the stairs by Duchamp among others.

Classical to Renaissance: 24 September, 7pm
The first session will review the Classical Nude, beginning with Ancient Greece, whose culture represented the nude as a means of portraying ideas of beauty and nobility. The talk will continue to discuss the Renaissance world in which classical ideas were revived and developed further to depict the nude figure as a representation of heroism, beauty, knowledge and the high arts of the time.

Neoclassical to Modern: 1 October, 7pm
This session will trace the portrayal of the nude body during the course of history from the Neoclassical period through the modern era in which 20th century values changed our perspective of the exposed figure as emotional truth overcame physical realism.