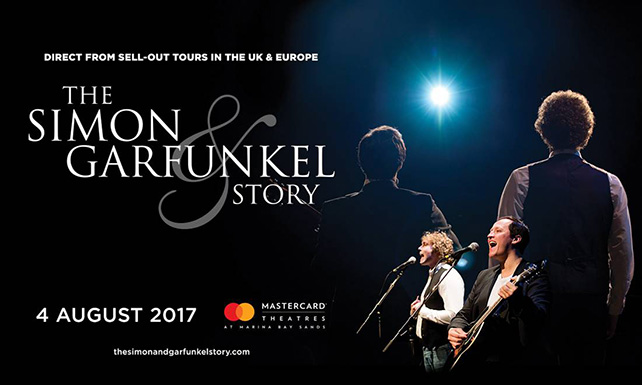 Following a sold out season on London’s West End and various cities across Europe, the UK production of The Simon & Garfunkel Story is coming to Singapore for one night only, on 4 August.

This acclaimed production tells the fascinating tale of how two young boys from Queens, New York went on to become the world’s most successful music duo of all time. Starting from their humble beginnings as 50s Rock n Roll duo Tom & Jerry, The Simon & Garfunkel Story takes you through all the songs and stories that shaped them, the dramatic split, their individual solo careers and ending with a stunning recreation of the legendary 1981 Central Park reunion concert.

Using a huge projection screen, the show features 1960s photographs and film footage accompanied by a full band performing all their hits including Mrs Robinson’, Bridge Over Troubled Water, Homeward Bound, Scarborough Fair, The Boxer, The Sound Of Silence and many more.