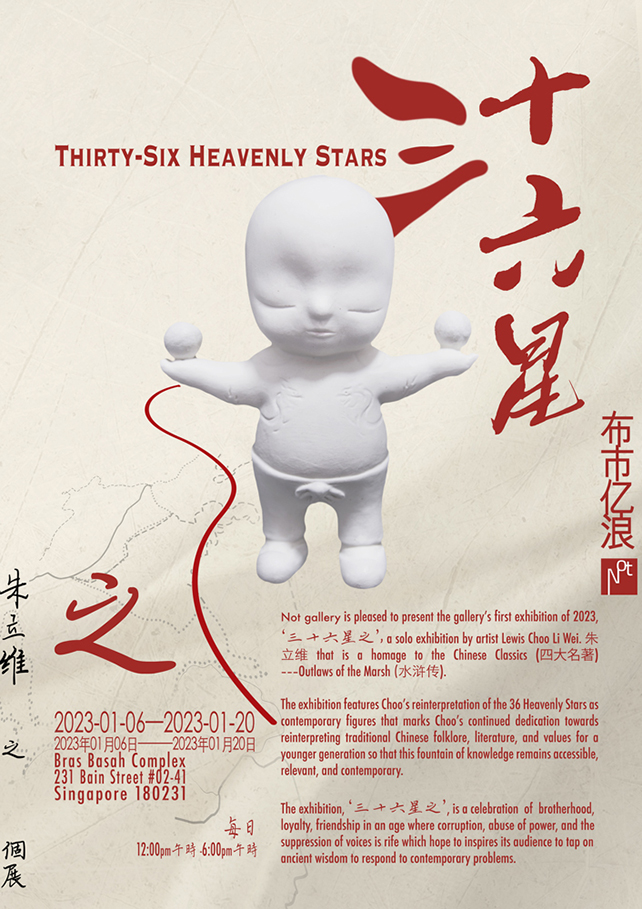 Stepping into the exhibition, one might mistake the individual ceramic artworks for the trendy POP MART figurines that is taking the world by storm. Yet, beneath the seemingly innocent and unassuming façade, lie a deeper, sophisticated social commentary. Drawing inspiration from one of China’s Four Great Classic Novels (四大名著), Outlaws of the Marsh (水浒传), this exhibition explores the ethical concerns that comes with functioning within a society, such as the relationship between people in positions of power and their subjects.

In Outlaws of the Marsh, the exploits of 108 outlaws, most of them victims of the abuse of power, take centre-stage as they traverse through the Northern-Central China, which was at that time the heart of the kingdom, to seek justice for the oppressed. As such, the Chinese epic is essentially a story of the common man’s fight against oppressive and unjust rulers, reinforced by themes of brotherhood, honour, and loyalty. In Thirty-six Heavenly Stars, these themes are similarly manifested in 36 ceramic artworks, a representation of the 36 Heavenly Stars among the outlaws, as each of these traditional characters are reframed as contemporary figures that appeal to the modern-day sensibilities of the viewers.

This exhibition has allowed Choo to return to his main mode of artistic expression – ceramics. As an artform, ceramics is historically significant in the Chinese artistic tradition as it dates back to the neolithic period. Choo has decidedly utilised only hand-building techniques to mould the individual figures as it provides room to unleash the artist’s creativity and further explore his craft. By tapping upon the rich tradition of pottery and ceramics and giving it a contemporary twist through imagery that borders on the kitsch, Choo breathes new life into each of the 36 Heavenly Stars and the values they have come to represent in the Outlaws of the Marsh.

As a young, Singaporean artist with a strong Chinese cultural upbringing, this exhibition marks Choo’s continued dedication towards reinterpreting traditional Chinese folklore, literature, and values for a younger generation so that this fountain of knowledge remains accessible, relevant, and contemporary. And while Choo’s inspiration is rooted in the Chinese culture, his concerns transcend a particular culture as his art seeks to reflect the social and political concerns of the day. In an age where corruption, abuse of power, and the suppression of voices is rife, the artworks that viewers encounter in Thirty-six Heavenly Stars can hopefully inspire them to tap on ancient wisdom to respond to contemporary problems.