Timeless Treasures: A Collection of Modern and Contemporary Masters from across the region 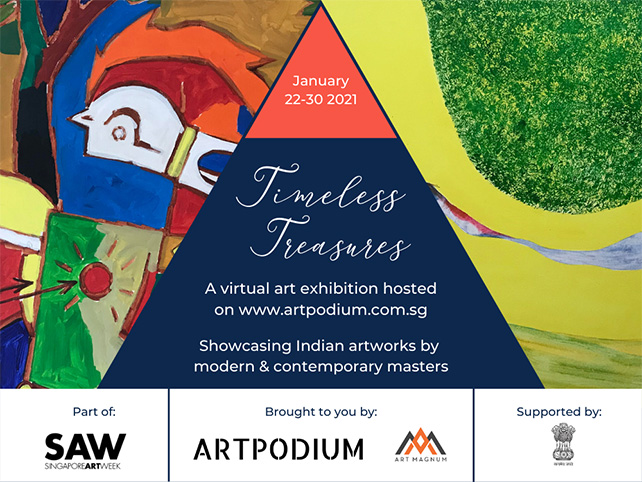 ARTPODIUM and Art Magnum present an exclusive art exhibition by prominent Indian Masters. The show titled “Timeless Treasures” aims to showcase the vibrant aesthetics and artistic capabilities that emerged as ‘New India’ as it transitioned from British colonial rule to become an independent modern nation.

These creations happened during and after India’s declaration for independence in 1947. As India grappled with its new status of a sovereign nation, these artists started a movement to develop their language – a powerful combination of indigenous history and India’s rich cultural heritage.

The show has brought together over 50 artworks sourced from private collectors worldwide and some artists themselves. Most of these works have either been published or authenticated by experts and are of known provenance. An illustrated catalogue listing the scholars of Indian art and modern history will accompany the exhibition.

Virtual opening: A one day preview will be held on Thursday, January 21st, where all artworks will be available at an exceptional value. Those interested can register to receive the event link HERE.