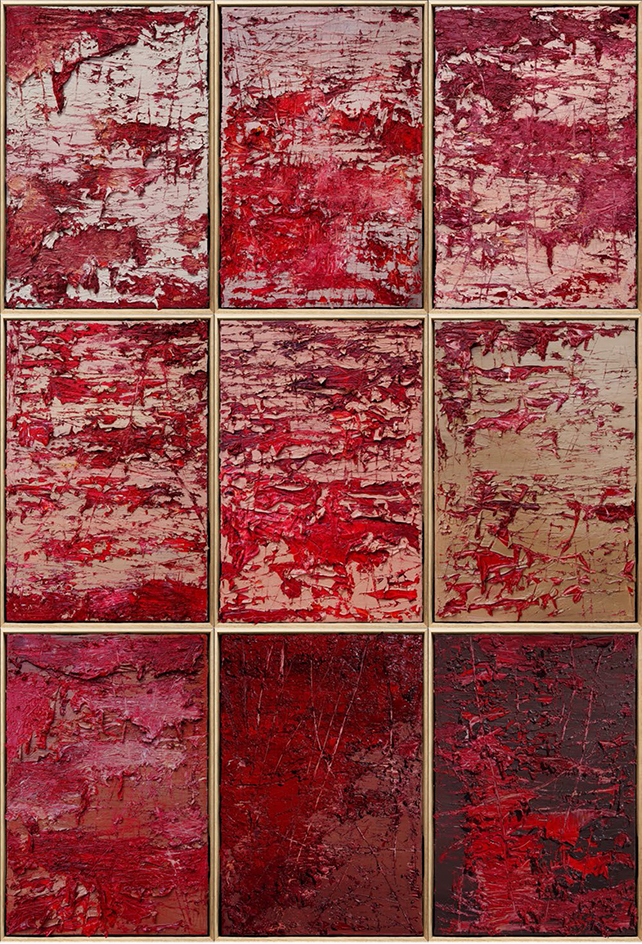 Today’s Special is Malaysian artist, Yeoh Choo Kuan’s (b. 1988) first solo exhibition in Singapore. The artist will present a set of 9 oil paintings on linen and 15 shaped board works completed within the years of 2016 – 2020. The works culminate as Yeoh’s artistic contextualization of the current media phenomenon in the United States, closely tied to the current presidency of Donald Trump and his legacy in the reality TV show “The Apprentice”. The exhibition tracks how Yeoh’s practice has transitioned over the years from exploring abstract paintings to his recent board works. By extension, it also represents Yeoh’s perspective on the gradual mental degradation of power. Yeoh alludes to notions of violence, resentment, chaos and absurdity through his pursuit of providing a visceral experience of power dynamics.

The 2017 paintings are an important series in Yeoh’s practice as it marks a major shift towards gestural abstraction with highly textured strokes. Self-coined by the artist as “Fleshing Abstraction” – a synthesis of disintegration set in contrast as the tensions and forces are weighted on the oil surfaces. A sense of nonchalance is presented in the artistic process and echoes the titles of the works, while its base line of “You’re Fired” in different permutations steep in disrespect. Akin to the chopping board series, the surface of the paintings has received similar treatments of mark-marking. Viewers are confronted by a purposeful but violent landscape.

As the next presidential election looms in the United States, Today’s Special serves as a reminder of the artist’s experience in the past 4 years and also fair warning to what’s on the coming menu.