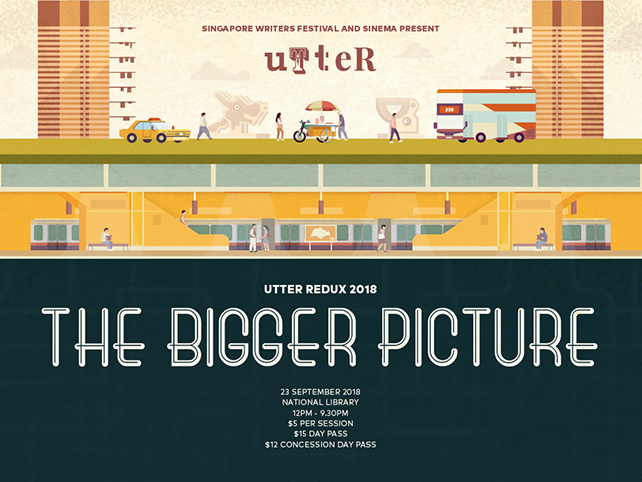 Singapore Writers Festival and Sinema Media are pleased to present Utter Redux 2018! In this one-day conference, discover local films based on local literature in a series of screenings, talks, and workshops.

Utter, an offering of the Singapore Writers Festival, showcases the best of Singaporean writing and celebrates its potential to be adapted into different media and across languages. Since 2013, it has produced numerous short films, giving audiences fresh perspectives and a deeper understanding of our homegrown authors. A retrospective of past films, Utter Redux seeks to recontextualise its body of work and bring its stories to a new audience.

Literature and cinema have always been a mirror to everyday society – together, they present a bigger picture of our lives and times on this small insatiable island. Learn about the craft of filmmaking, all the way from print to screen; explore social issues through insightful panel discussions; or just sit back, relax, and catch films you may not have seen before.

PANEL DISCUSSION: Redefining the Five Cs
12:00 PM – 1:30 PM | The Possibility Room
Is the Singaporean Dream every Singaporean’s dream? Do we all share the same drive to chase after credits and credentials? Yet in our pursuit of all things greater, what gets left behind? Three short films examine the dreams of people who call Singapore home, followed by a panel discussion on the pursuit of such dreams and the things that are sacrificed in return

PANEL DISCUSSION: Gray Dot
2:00 PM – 3:30 PM | The Possibility Room
As familiar faces wrinkle and footsteps slow, the plight of the elderly becomes increasingly apparent. Films have portrayed countless lonely grandparents – but how accurately does this reflect real lives? In this session, four short films explore the cruelties that come with age, followed by a panel discussion on elderly representation in media and their involvement in the arts community.

WORKSHOP: Scene & Unseen
4:00 PM – 5:30 PM | The Possibility Room
Lean in close, take a scene apart, and see how it ticks. In this workshop session, film scenes will be dismantled and compared side by side with its script and the original fiction story it was based on. Each stage of the scene will be examined; from writing the script to bringing it to life in front of the camera.

WORKSHOP: Film Stripped
6:00 PM – 7:30 PM | The Possibility Room
Making films is a long, daunting endeavour – perhaps even more so when it’s based on existing works by important literary figures. Two directors – one for live action, the other for animation – walk through their filmmaking process from pre-production to post-production. This workshop will touch on a myriad of aspects, such as adapting the text to script, putting together a visual style, and paying respects to the film’s literary roots.

FILM SCREENING: One Hour To Daylight
8:00 PM – 9:15 PM | The Pod
2016 | English, Mandarin, Malay & Tamil with English & Chinese subtitles | 77 min | PG
Cultural and social tensions threaten to divide the inhabitants of a present-day Singaporean estate. A lift technician, Chen, dies in an unfortunate work site accident, and his wife travels here from China to collect his body. Overseeing this case is ambitious Malay lawyer, Andy, who disregards both his wife’s objections and the possible consequences of giving their daughter, Dela, a Dream Device, to better her studies. Dela’s classmate, Alyssa, has to live with both her grandparents in the absence of her mother, and she knocks heads with them constantly due to their class differences. She seeks comfort in her best friend, Wei Ting, whose father, a jobless middle-aged man, decides to rob a bank with Chen’s Bangladeshi co-worker, Nayeem. Their lives, though separate, are intertwined, and all collide in the Curry Incident.