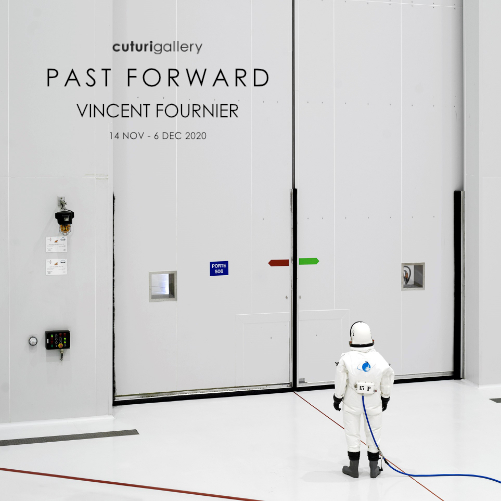 Cuturi Gallery is pleased to present Past Forward, a solo exhibition of Vincent Fournier (b.1970, France). In marking the French artist-photographer’s inaugural exhibition in Singapore, Past Forward will bring together a selection of work from his critically acclaimed series Space Project (2007–), Brasilia (2012–), and from the latest Kosmic Memories (2020–).

Primarily working in photography, Fournier produces imaginary archives that envision different mythologies for the future. Fournier is driven by a curiosity for utopias, where his photographs span through the lenses of space exploration, visionary architectures, and the technological transformation of the living, among others. By capturing current technological advancements in his exploration of futuristic fiction, Fournier’s photographs reside in a liminal space across different temporalities of our past, present and future. His choice of subject matter not only gives rise to certain aesthetic and philosophical concerns about our existence, but also embodies a capacity to generate stories that straddle between the real and imagined realms of what our world could come to look like. While bordering several oppositions between fact and fiction, science and faith, the ambiguity in Fournier’s images goes beyond these simplistic binaries to expand the field of possibilities toward visualising, dreaming and imagining of our future. His works can be found in the permanent collections of the Metropolitan Museum of Art (MET), the Centre Pompidou, and Fondation Louis Vuitton, among others. Most recently, Fourier has staged solo exhibitions at the Fondation Bullukian, Lyon (2019) and Museo d’Arte Moderna di Bologna (MAMbo), Bologna (2017). In addition to major group exhibitions at UCCA Center for Contemporary Art, Beijing (2019), Mori Art Museum, Tokyo (2019) and the ArtScience Museum, Singapore (2017).

For Past Forward, Fournier will be presenting works from his founding series Space Project (2007–). Tracing the historical trajectory of space exploration, Space Project (2007–) documents man’s fundamental desire to explore and discover the infinite Universe and its unknowns. Such encompasses historical moments of humanity’s adventure in space, from the space race during the Cold War, to Project Apollo in charting man’s first steps on the Moon, to the future NASA Space Launch System (SLS) destined for Mars. Fournier presents otherworldly cinematic scenes of researchers in sterile environments, elaborate futuristic-looking machines across research centers, and space-suited men traversing mysterious terrains. Dreaming beyond the observable Universe, Fournier’s photographs provide glimpses into man’s relationship with the vast emptiness of space, reflecting and extending into the varied considerations of the larger cosmos we inhabit.

Conceived at the beginning of the space age, Brasilia (2012–) examines the architecture of the Brazilian capital located in the middle of the desert. Conceptualized and designed by urban planner Lucio Costa and architect Oscar Niemeyer, Brasilia is a city fossilised in a utopian future as imagined in the 60s, and currently sits on the UNESCO World Heritage List. Bearing geometric abstractions of minimal and open qualities, the structural elements of the city’s architecture emanates a promise for the future, albeit tinged with nostalgia. As part of his staged photographs, Fournier places local inhabitants against the city’s monumental architectural features, transforming each image into a life-sized stage. The theatricality of his scenes lends to a surrealness in thinking about the constructed fantasies of our collective future. Brasilia (2012–) appears to be suspended in time, documenting a city of tomorrow frozen in time, caught between the past and the future.

Kosmic Memories (2020–) reveals extraordinary architectures, veritable totems of civilization of the future erected as so many signs of a possible elsewhere. Built mostly in concrete and at the tops of stellar landscapes, a telluric power from elsewhere emerges from these monumental architectures. Their location, while often a place of memory, also coincides with dawn or dusk, with a lateral light that reinforces their strangeness. “Where does it come from? Where did it come from? What is inside? Where and when will it start again? Who, the snow that holds back or the sky that calls (reminds?) Will have the last word? Fournier’s eye creates a link with the unfathomable mystery of
the endless universe. And he asks: where did it come from? When is it going to start again? Or not.

Through Past Forward, Fournier brings us on a journey in navigating and contemplating the varied aspects of humanity’s ambiguous future, one that is filled with expectations, unease, and aspirations.

Vincent Fournier: Past Forward will be on view at 61 Aliwal Street from November 14th until December 6th. Opening Weekend (November 14th & 15th) from 2 to 8 pm. Admission is free.