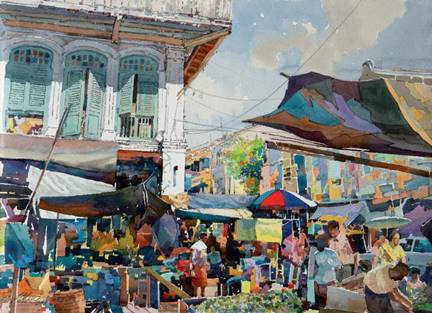 Mr. Ong Kim Seng has recently been named as the Top 25 Watercolour Artists in the World during the Watercolour Festival in Greece in November 2017. This exhibition celebrates his latest achievement and showcases to the public a selection of work that reflects his journeys across Singapore and other parts of the world to capture architecture and landscapes at their unvarnished best. The exhibition will be officially opened on Saturday, 25 August 2018, 3 – 4pm, at Gallery One of The Arts House. Mr. Melvin Poh, Founder and Managing Director of Fission Property Group, will officiate as the Guest-of-Honour. In conjunction with the exhibition, a new catalogue sharing the same title as the exhibition will also be launched during the opening. Admission to the exhibition and its opening event is free and open to all.

In addition to an enthralling repertoire of Singapore scenes and travel landscapes, the exhibition features paintings done during the artist’s overseas workshops and from rare projects undertaken earlier in his career. This includes a painting of Horsburg Lighthouse on the island of Pedra Branca (Mr. Ong has so far painted all the lighthouses belonging to Singapore, including the one on Pulau Pisang in the Straits of Malacca), and a painting of 38 Oxley Road (House of Mr. Lee Kuan Yew), which was among the paintings completed in 2017 when he was commissioned by the late Minister Mentor’s family to paint 38 Oxley Road.

Mr. Ong’s paintings in the California watercolour style require special mention in this exhibition. The California style of watercolour painting had emerged from American artists from the West Coast in the mid-1920s to mid-1950s, and is recognised as a distinct American watercolour style that permeated the global arts scene. With the application of a hyper-stylised colour scheme and strategic juxtapositions of warm and cool colours, these works are striking in their re-imagination of familiar scenes yet are sensitively rendered, representing the artist’s quest in enriching his visual vocabulary over the years.

Experimenting with the California watercolour style since 1975, Mr. Ong explains, “When I was younger, I was a little apprehensive painting the California style with the Sunday Group which included Lim Cheng Hoe. This style sort of veered against the British transparent watercolour style, which was the norm in the 1970s. So I often painted alone when I wanted to explore it.” His practice of sketching out a scene en plein air, then returning to his studio to devise a re-imagined palette in the California style is an intellectual exercise in and of itself, a fresh challenge in which the artist relishes.