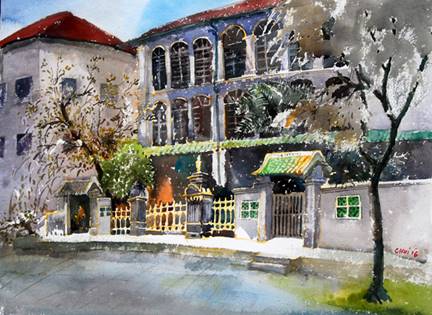 The tradition of watercolour painting was introduced in Malaya in as early as the 18th century through the works of British maritime artists who eagerly recorded topographical and botanical details relating to the Malaysian landscape. The watercolour medium subsequently flourished in Malaya with the inception of English public schools for the locals – often founded upon Victorian education models that propagated English sensibility in art and literature. Much has been written about Sir Richard Walker’s arrival in Singapore in 1923 and the important role he undertook as the Art Superintendent of English public schools. Among the students he taught and encouraged in watercolour activity was Lim Cheng Hoe, whose dedicated pursuit of British watercolour style on local landscapes made him one of Singapore’s most important pioneer watercolourists. Additionally, Watercolour painting was among the mediums offered at the Nanyang Academy of Fine Arts where many second-generation local artists honed their skills.

Art Talk & Demonstration of Watercolour by Artist Khor Ean Ghee: 24 September 2017, 3 – 4 pm
In conjunction with the exhibition, artcommune is hosting an art talk on the history of Singapore Watercolour Society as well as a demonstration of watercolour by one of the Society’s founding members Khor Ean Ghee. Mr. Khor, who is formerly an interior designer at the nascent Housing and Development Board was also the designer behind Singapore’s iconic “Dragon” playground. Admission is free but registration is required via valerie@artcommune.com.sg.