We Will Meet: Solo Exhibition by Alvin Ong 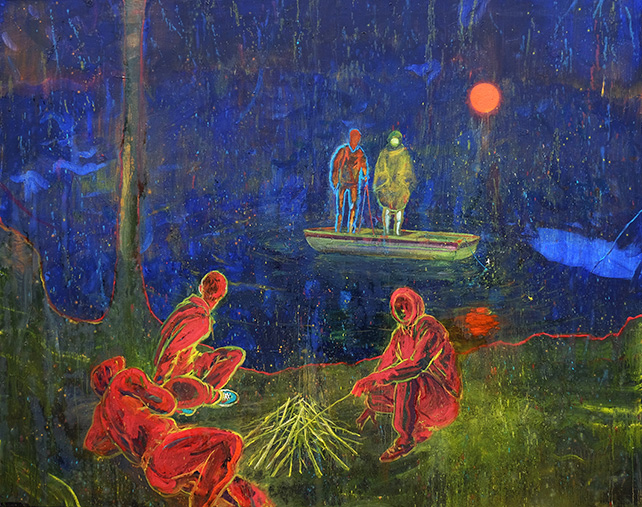 We Will Meet is a solo exhibition by Singaporean artist Alvin Ong. Having previously explored the local through vanishing rituals and cultures in Singapore, Alvin Ong’s latest figurative paintings mark an evolution in his subject matter. In We Will Meet, Ong presents a new series of works with a shift towards an interest in finding the local in the global, inspired by a month-long coastal trek through Spain. Walking through countless towns and landscapes, the wanderer encounters solitude, other people, and eventually, oneself.

In these reimagined memories and enchanted dreams, the nocturnal landscapes are awashed in neon light with characters encountered resurface as figures transformed by infrared and thermal imaging. Engaging in silent dialogue with one another, they are projections of the artist – as nomad and wanderer. Moving between worlds, encountering one another as their paths meet in the dark. This series is thus experienced as a journey, an ongoing dialogue with the painting process – and life itself. Along the way, the wanderer often tries to perceive the unfamiliar through the familiar, comparing these foreign lands against his own. The wild dogs of the Spanish wilderness reappear as Qilin – mythical animals commonly found in Chinese temples and embroidered altar cloths. Ong’s experiences of rain and the untamed wilderness are reconstituted in translucent drizzles and impassioned smears of vivid colours. We Will Meet is an invitation; to new friendships, new encounters and new beginnings.