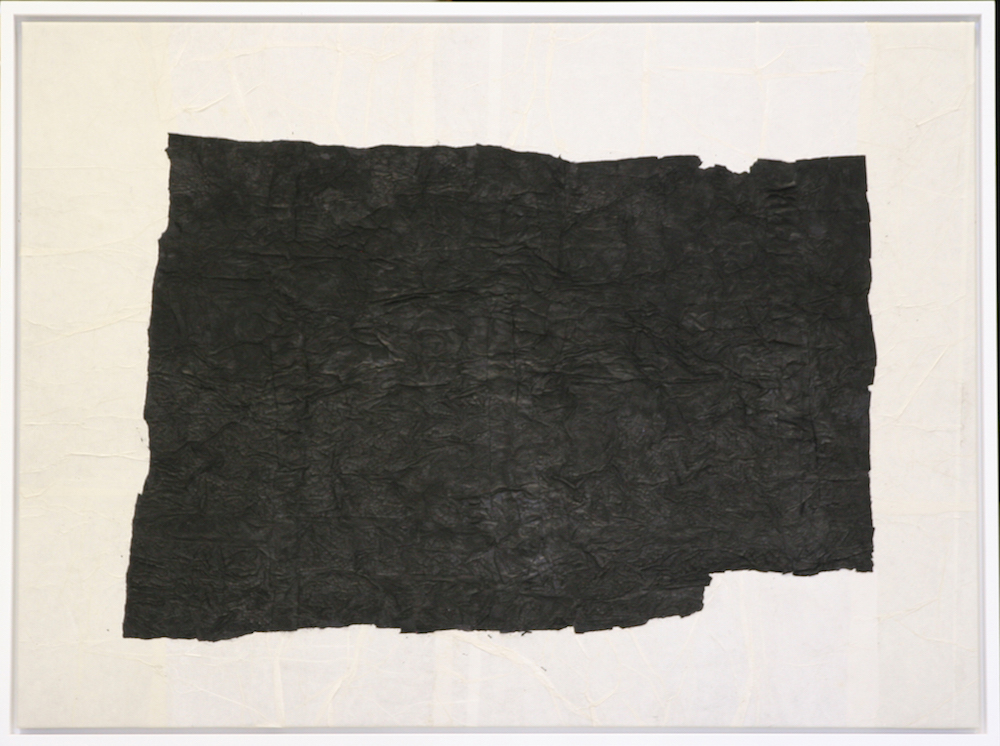 ARNDT is pleased to present works by leading Chinese artist Yang Jiechang. Entitled 100 Layers of Ink, the pieces dating back to the late eighties and are the result of focused repetition and process.

Since his emigration to Europe in 1988 Yang Jiechang has worked on a series entitled 100 Layers of Ink. The first and most outstanding works of this series, a set of four huge ink paintings, were exhibited in the seminal show Les magiciens de la terre in the Centre Georges Pompidou, Paris (1989). In these large monochrome black paintings, which are a continuation of his early abstract works, the dualistic principle of Taoism is evoked by the black and shiny surface of the ink shapes.

This series is the result of the artist applying ink to the same piece of paper, day after day, until the paper is completely saturated. Despite the materials employed sharing association to those used by literati to make traditional paintings, Yang reinvents them by entirely removing the artist’s gesture as an index of meaning. By obsessively building layers on layers of ink, thus creating a black object that do not display skill, imagery, or personality, Yang subverts the traditional technique and aesthetic appearance of traditional Chinese ink and wash painting. This position can be considered as a deconstruction of Chinese painting and its tradition into its basic elements: paper, water, and ink.

Taking on a shimmery, luminescent quality, the paper itself shifts from a two-dimensional surface to a three- dimensional object, merging figure and ground. The simple abstract forms seem to stretch beyond their margins and beyond the painting, recalling the process of sublimation of the self in meditation. The multiple layers of ink the artist applies to the paper connote time and enliven a black space. A major concept one can perceive throughout Yang’s artistic oeuvre is that of the ambivalence of perception and experience. The artist looks for experiences that stimulate an insecurity in the viewer. Yang aims to push the perception of his work to extremes, to a point where mind and body, where the individual life and the life as natura naturans meet. This understanding of life again is related to Chan- Buddhism and to Taoist thought. Here individual life and life as a creative force of nature are regarded as an entity, as are its material and its spiritual aspects. Similarly, Yang Jiechang’s shiny black abstract works seem to dissolve into or emerge from an amorphous, yet spirited cosmos.