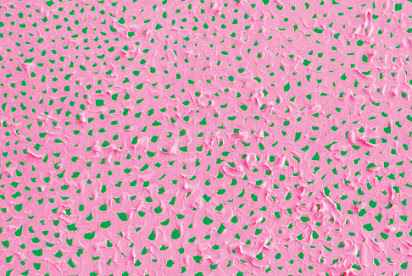 “Yayoi Kusama: Colour Song” is a solo exhibition featuring 7 recent paintings from the artist’s most significant series of work, ‘Infinity Nets’. As an internationally-acclaimed artist, Kusama has brought inspiration to people all over the world, and she continues to create artworks vigorously at the age of 88 years. This exhibition is dedicated to the artist’s resolve and devotion to art by presenting her most recent renditions of the series.

Yayoi Kusama has been highly valuated as a vanguard of prominent art movements in the late 20th century such as pop art and minimalism. Although the artist is now well-known for her colourful and ‘pop’ artworks, as well as polka dots and pumpkin motifs, the ‘Infinity Nets’ series could be said to be her starting point. This series was first shown in the 1950s in New York. “I would cover a canvas with nets, then continue painting them on the table, on the floor, and finally on my own body,” the artist explains. She has been experiencing hallucinations where her surroundings are covered completely with the pattern of polka-dots or nets since childhood, and by repeatedly painting the same motif obsessively, she manages to overcome her fear.

Kusama never stops challenging herself to push boundaries. Her artistic practice now spans painting, drawing, collage, sculpture, performance, video, print, installation and much more. Yet, her visionary philosophy remains constant: it harkens to the universe, elevating her very self to the realm of the cosmic. Containing such concepts in its core, the ‘Infinity Nets’ continues to represent her oeuvre well amongst her other brilliant bodies of works. This exhibition boasts a concentration of these paintings which are each unique in their diverse texture and movement, as well as their combinations of various colours and metallic tones.

Kusama’s creations are well-received globally: she has had numerous solo exhibitions which have remarkably toured museums internationally. In a short span of 6 years, Kusama has held 5 touring exhibitions over 24 cities all around the world. In 2012, her large retrospective was held at the prestigious Museo Nacional Centro de Arte Reina Sofia (Spain), Centre Pompidou (France), Tate Modern (UK) and Whitney Museum (USA). In the following year, her Latin America retrospective tour travelled to Argentina, Brazil and Mexico through 2014. She continued to extend her reach to Asia with a touring exhibition in 2013 with over 100 recent works, travelling from South Korea to China and Taiwan. 2015 marked the beginning of her Scandinavian tour exhibition which took place in Denmark, Norway, Sweden and Finland with record-breaking visitor numbers.

Most recently this year (2017) her American tour began at Hirshhorn Museum and Sculpture Garden (Washington) and will travel to Seattle Art Museum (Seattle), The Broad (Los Angeles), Art Gallery of Ontario (Toronto), Cleveland Museum of Art (Ohio) and High Museum (Atlanta) through 2018. She also has an ongoing solo exhibition “YAYOI KUSAMA: My Eternal Soul” at The National Arts Center (Tokyo) till 22 May 2017.