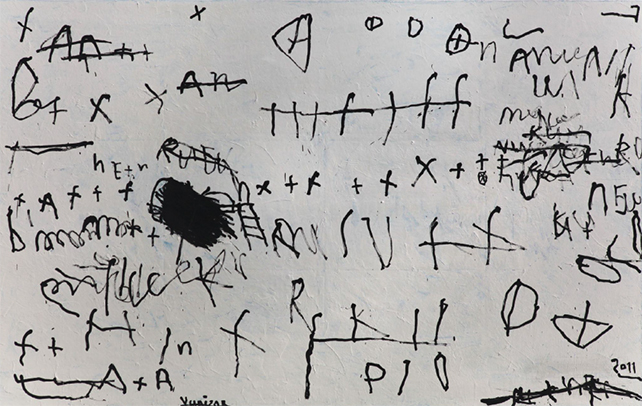 Yunizar remains a singular voice in Indonesia’s contemporary art history. His artistic career took off in the late 1990s, when the fall of Suharto triggered an art world heated with the socio-political issues of the time. Yunizar’s haunting early work, however, resisted the noise and didacticism of political art. He chose instead to focus not on grand, heroic narratives, but on the richness of the everyday. From falling fruits to mad dogs to anonymous, alienated people, his subjects may have been mundane—but his paintings were filled with emotional tension and a plethora of meaning. Radically subverting conventional notions of beauty, Yunizar imbued his canvases with smudges; muted earthy colours; and raw, crude lines and figures. The deceptive simplicity of this visceral style, paired with the psychological depths and elusiveness of his subjects, is ultimately what persists to make his works powerful.

The works on display capture the unique trajectory and milestones of Yunizar’s career: from his paintings of enigmatic figures in dark, archaic colours from the late 1990s; his Coretan works that infuse rhythmic, ‘unreadable’ scribbles and draw our attention to the expressive power of texts; to his bold, eccentric bronze sculptures that developed in the 2010s. Yet, they also reveal how Yunizar’s evolution is far from linear. Traces of Yunizar’s Coretan series have emerged since the 1990s, and continue to surface in his work today. Curators and writers praise these impressionistic writings as resisting fixed, conventional meanings; rather, they capture more profound kinds of communication. The complexities of these works are thus testament to how there is still much to unpack in the works of Yunizar—prompting the need for ‘new perspectives’.