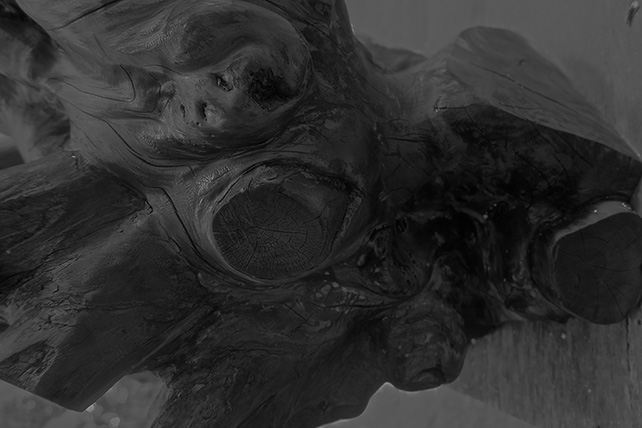 “Autopsy” is a solo exhibition featuring latest works by Zai Kuning including sculptures and drawings. Through his presentation of sculptures made of wood, Zai attempts to provide alternative ways of looking at the lives of trees. The drawings, which depict human body shapes, further articulate his thoughts. This exhibition will reveal a different approach to trees – a form of life inseparable from our lives yet too often neglected.

Zai’s thoughts about trees have been expressed since the early stage of his art practice. A large volume of tree, nearly 1 ton, was exhibited in his show A Tree in a Room at Sculpture Square (2004). The exhibition was held in memory of the late Kuo Pao Kun and also Pasir Panjang, the village where the artist grew up in. Kuo and Zai used to talk about the importance and symbolism of trees, especially old ones. Zai heard the story of ”The Giving Tree” from Kuo and learned that Gautama Budhha was enlightened while meditating under an old bodhi tree. “There are many stories about the relationship between the tree and human beings, which have not been told enough,” explains Zai.

The recent news of forest-burning in different parts of the world, including Sumatra island, has led Zai to think further about these issues. Human beings burn forests for their own needs. The artist wonders how big mankind’s greed can become, and to what extent trees can keep providing resources to Man. Through this exhibition, Zai begins the voyage of ‘finding truth’ in trees’ bodies as if he was conducting an autopsy. At the same time, he conveys the idea that if we treat and look at trees the same way we do towards human beings, the world will change naturally be supported by philosophy and culture. The relationship between Man and trees, or nature, has always been full of contradiction. Zai addresses that human beings must understand that without the tree, they cannot have built civilization and their intelligence could have become useless.