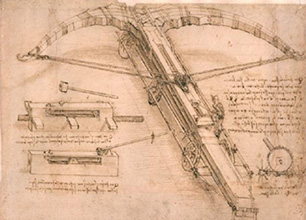 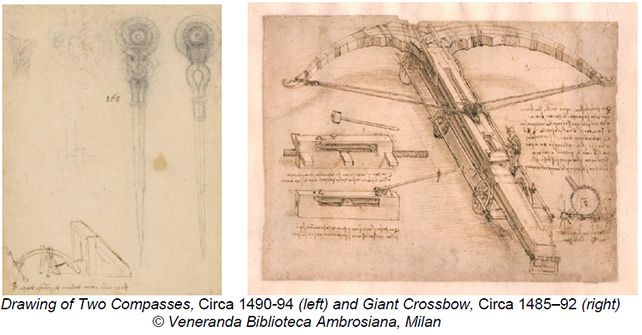 ArtScience Museum unveiled its eagerly-anticipated renewal of the original masterpieces showcased at Da Vinci: Shaping the Future, as the exhibition approaches the second half of its run. The refreshed displays include a new collection of 13 original pages of the Codex Atlanticus, da Vinci’s largest notebook, and three new paintings from the School of da Vinci.

As part of the renewed collection, visitors will have the rare opportunity to view a never-before-seen original Codex Atlanticus page, Drawings of Two Compasses. This folio features two drawings of intricately decorated compasses, which were important tools employed by da Vinci to determine the proportions of his machines and to mark designs on paper before he applied ink to his drawings.

Another beautifully illustrated page in the renewed collection is the Giant Crossbow, one of da Vinci’s most striking and celebrated folios from the Codex Atlanticus. Drawn with elaborate details and technical skill, the folio includes precise measurements of the machine’s components and a figure atop the machine to provide an indication of the scale.

The Giant Crossbow is a prime example of how da Vinci used his artistic skills to illustrate complex technical concepts.

“More than any other figure in history, Leonardo da Vinci represents the unity of art and science. Therefore, it is a great privilege to be able to bring a new collection of da Vinci’s masterpieces to ArtScience Museum, as part of this groundbreaking exhibition. What is particularly exciting for us is that one of the pages from the Codex Atlanticus, which arrived from Italy this week, is being shown in public for the very first time. We are grateful to have been able to work so closely with Veneranda Biblioteca Ambrosiana to realise an exhibition that vividly illustrates how da Vinci’s genius, creativity, and systems thinking continue to inspire and shape the world we live in now,” said Ms. Honor Harger, executive director of ArtScience Museum. 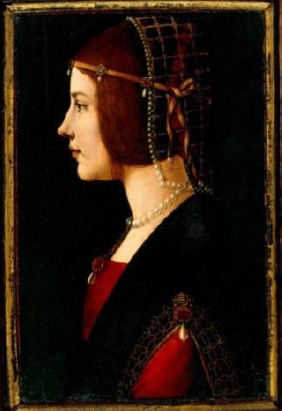 Portrait of a Lady (Circa 1490) © Veneranda Biblioteca Ambrosiana, Milan

One of the new original paintings that will be on display is the visually arresting Portrait of a Lady. Donated to the Veneranda Biblioteca Ambrosiana in 1618, the painting was attributed to da Vinci until the 19th century. While the references to da Vinci are evident, such as the knotted golden braid on the lady’s garment, the mesmeric painting remains elusive as both its subject and author have yet to be confirmed despite generations of study by critics and scholars. While some leading scholars firmly attribute the painting to da Vinci and others favour a more prudent attribution, these controversies have never debased the work’s appeal, only increasing its mystery.

Other new paintings from the School of da Vinci that will be showcased are Christ Child with the Lamb by Bernardino Luini, the most famous Milanese painter in the early 16th century, and Adoration of the Child with Saint Roch by Giampietrino.