SAM welcomes Edmund Cheng to Board of Directors 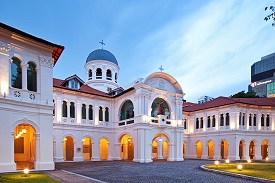 Ms Jane Ittogi is succeeded as Chair of the Singapore Art Museum by Mr Edmund Cheng, who leads the Board of Directors from 1 April 2018 onwards. As the Chair of its Advisory Board when SAM was a museum under the National Heritage Board, Ms Ittogi guided SAM through its corporatisation in 2013 and has since served as its Chair until the end of March 2018.

“I would like to thank Jane for her dedicated leadership. Under her stewardship, the Singapore Art Museum has established our voice in the Southeast Asian and global contemporary art scene, and made the visual arts accessible to more Singaporeans. We welcome Edmund as he takes over the helm, and look forward to SAM’s continued engagement with local, regional and international art audiences.”

An advocate of the transformative power of art, Ms Ittogi has been instrumental in defining SAM’s focus on contemporary art practices from Singapore and Southeast Asia. She has championed deeper public engagement with contemporary art through talks, workshops, events, pop-up exhibitions, and collaborations with various communities. One such example is her active support for the long-term partnership between SAM and the Yellow Ribbon Project, which culminated in an annual presentation of inmates’ artworks at the museum.