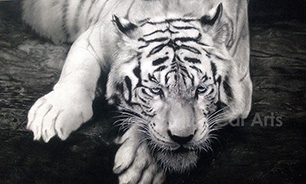 Update 21 April 2017: The CPF pasted stickers on the artworks – which are still stored at the warehouse – and the logistic company has been informed that they are not to be removed without the written approval of the State Courts. The artists are being asked to provide documents which show their ownership of the works by 10 May 2017. After the Court is satisfied that the assets do not belong to Mandala, it will issue a written notice to authorise the logistic company to remove the Court stickers.

This still does not mean that the artists will receive their works back, since the logistic company is holding on to any artworks on behalf of Mandala.

The reason why the government department steps in is because Mandala did not pay his employees CPF and salary.

Update 1 February 2017: Artists informed SAGG that Singapore authorities are not investigating the issue further. Please read the article by artist Alexander Belozor for more info about the fraud. It also includes images of the art dealer, who calls himself “Rayan”.

This article is an updated version of the previous post from 23 September 2016.

On September 17th, 2016, the Singapore Art & Gallery Guide (SAGG) received an email from a luxurious beach hotel on the Maldives. It was a payment reminder for Mr Rayan (who seems to operate under various names) from Mandala Fine Art Gallery Singapore, regarding unpaid accomodation and food bills for a business stay in March 2016, booked in the company’s name. Ltd. The email exchange included in the mail has been going on between the various parties since April this year. The hotel has now reached out to SAGG because Mandala Fine Art was listed on the SAGG website (we deleted the venue meanwhile).

We forwarded the mail to various contacts at Mandala Fine Art Gallery, but didn’t receive a response from them. Instead, a former employee has sent us the following information:

Rayan has owed ex-employees salary, vendors payment and artists artwork plus payment since December last year. He has also since moved his office 3 times, owing rental fees up until now. Artists have been reaching out to me to ask for help to retrieve their artwork but I can’t do anything. The reason being that the storage rental contract was signed between Rayan and the storage company. Without payments, the storage company has the right to detain the artwork till full amount is being paid. In total, Rayan has owed 2 storage companies up to an amount of $15,000 or more.

Anyway, police reports were made, MOM and CPF were informed, Ministers of Parliament were told and newspaper reported, but there’s no way we can stop him from continuing running his business in Singapore.

SAGG received confirmations for these allegations in written form from several international artists, who were invited by Rayan to submit their artworks for an exhibition which took place in Singapore last November, and who are now struggling to retrieve their artwork.

SAGG contacted Rayan/Mandala Fine Art Pte.Ltd., to give them the chance for a counter statement, which we have not received to date.

Apparently, Rayan has also been involved in art fraud previously and even forced artists to forge artwork (which has been confirmed by a former employee): Photographer gets a shock seeing an imitation copy of his own work on sale for $6k at art exhibition

Concerned international artists agree that these kinds of business practices are causing great damage to Singapore’s reputation as a ‘safe place to do business’.