The Nataraja Image in Transient Contexts 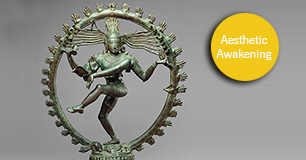 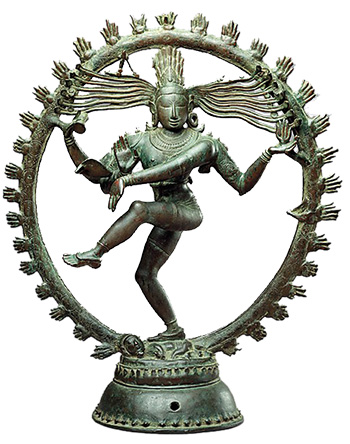 In current times, the image of the Nataraja has become one of the most featured and recognised icons/symbols that unanimously represents Indian art or the cultural heritage of India in general, playing the role of a cultural ambassador for India in a tremendously global context. Indeed, context plays a significant role in the continuing cultural biography of the Nataraja image. From being a sacred entity, the Nataraja image has indeed become an irrefutable aspect of commoditization, as it holds on to a niche of its own as a commodity in the art market as well.

The Nataraja is one of the many forms of the Hindu god Shiva, as the Lord of Cosmic Dance. It is a concept with a dynamic representation, whereby the Lord symbolically performs the ananda tandava, literally meaning ‘the fierce dance of bliss’ (there are 108 tandavas or dance stances in which the Nataraja can be portrayed), which is the dance that encompasses the mythological, cosmic and cyclic phenomenon whereby the universe is created, sustained and destroyed, only to emerge again for the next round of this eternal cycle that rules the cosmos. At this juncture, it will be appropriate to make a reference to Fritjof Capra’s study of Nataraja’s dance in relation to modern Physics. Capra refers to Nataraja’s dance as ‘the dance of subatomic matter’, whereby every subatomic particle performs an ‘energy dance’, which he refers to as ‘a pulsating process of creation and destruction’.

Typically and particularly in sculpture, the Nataraja is visualised and portrayed as standing in a majestic stance on his bent right leg, while his left leg is gracefully raised across the right leg. He has four arms; his rear right arm holds a drum (damaru), which represents the primal sense of sound, while his left rear arm holds fire, representing one of the five elements of nature; his front right arm denotes the gesture of protection (abhaya mudra) while the other front arm stretches elegantly in a dance gesture. He signifies the act of subduing the ego or ignorance as his right leg stamps with perfect balance on a mythological dwarf by the name of Muyalagan, the personification of ego and ignorance. The spread of his matted locks suggest the flamboyant movement of his dance, with the accommodation of the crescent moon and the river Ganga (or Ganges), signifying the source of yet another element of nature. His entire dancing figure is surrounded by a ring of flames. The origins of the Nataraja image remains debatable.

However, it is unanimously accepted that the Nataraja is essentially and primarily a deity of the Tamil Region of India, regardless of its international lure. In the context of the performing arts, the Nataraja is regarded to be the embodiment of classical dance and a metaphor for rhythmic movement (elaborately and synonymously associated with Bharatanatyam, one of the oldest and most popular dance forms of India). This context coincides with the image’s religious aspect, as, even in the context of the performing arts, the Nataraja image is viewed from a devotional perspective. In the context of art history and aesthetics, the concept holds paramount significance by the very fact that the technical and aesthetic brilliance of the depiction of the Nataraja image in bronze reached its zenith during the dynamic and mighty Chola dynasty in South India (c.300 BC – c.1279 AD). Furthermore, in the context of philosophy, the image embodies key references to the elements and disposition of time and space, timelessness and cosmology. Also, there are mathematical, diagrammatic and metaphysical elements in the form of the Nataraja image, which provide a legitimate connection to the context of artistic creation in contemporary times. Indeed, this is the context that inaugurates a secular perspective to the Nataraja image and its concept.

It is not a myth, but a fact that the possibilities and tendencies, within the ever-continuing cultural biography of the Nataraja image, form an entity that promises to be culturally-momentous and socially-indicative, as long as the active role of transient contexts persists.

For research references, contact the writer at gnani_arts@yahoo.com.sg or call 9003 2851.
www.gnaniarts.com