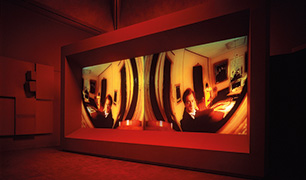 Coinciding with the Singapore International Festival of Arts (SIFA), the Centre for Contemporary Art (CCA) Singapore introduces theatricality as a critical strategy in performance, film and video.

In this exhibition, theatricality is not conceived strictly as a phenomenon in theatre, rather, it points to the ‘constructedness’ of everyday life. Theatrical forms make visible how our realities are staged and also how our histories are constructed and performed. The artists in this exhibition make use of various theatrical elements – from “character” to “voice”, “script”, “choreography” and “ritual” – to question and re-vision society’s existing scripts and histories.

Theatricality also refers to the meeting point between theoretical reflection and theatrical spectatorship through their common etymology. The concepts “theatre” and “theory” share etymological roots: both are derived from the Greek word “thea”, which means “to see”. Theatrical Fields evokes this deep-rooted connection between theatre and theory; in this conception, theory suggests an act of contemplation of something that unfolds in front of our eyes. Moreover, in order to see something clearly, one needs to take a step back and contemplate it at a distance, like a spectator watching a play in the theatre.

Theatrical Fields, curated by Ute Meta Bauer with Anca Rujoiu, was first presented and commissioned by Bildmuseet, Umea in Sweden (2013). Ute Meta Bauer, CCA Founding Director, says: “It will be exciting to see how the use of fairy-tales, masks and rituals, ghosts and specters of the past in works produced in Europe and North America will resonate in the context of Southeast Asian’s strong tradition of storytelling.”

The exhibition is complemented by a solid programme of events that explore theatricality as a critical tool in contemporary art and culture.