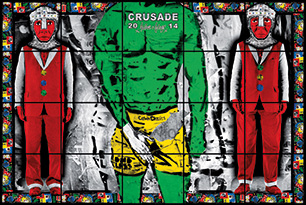 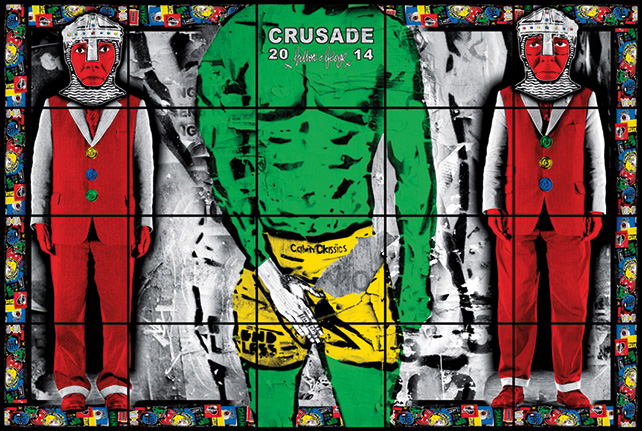 “Since first meeting at St Martin’s School of Art, London, in 1967, Gilbert & George have dedicated their lives to creating art that communicates their vision of the world in a manner that is direct, immediate, open-handed, mysterious, confrontational, generous, dizzying, ghost-like, intensely realistic, visionary and profoundly moral.

With a many layered intensity of thoughts and a radically inventive visual creativity, the art of Gilbert & George has always directly addressed the feelings, prejudices and emotions of each individual viewer.

The twenty-six UTOPIAN PICTURES, exhibited for the first time in the iconic Gillman Barracks, convey the moral vision of Gilbert & George with monolithic and declamatory intensity. These pictures depict a modern world in which authority and the resentment of authority, rules and rebellion, advertising and public information, dogma and warning, boasts and threats co-exist in seemingly endless proclamations: in notices and signs, on the streets and on public transport, in historic royal emblems, stickers, posters and graffiti. (…) 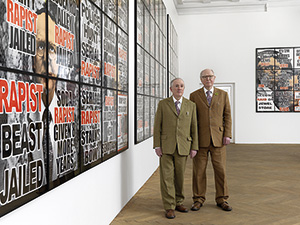 Gilbert & George have always asserted that the modern human condition, in all its aspects, can be found revealed in the streets around their home and studio in East London. The texts and emblems contained in the UTOPIAN PICTURES provide further proof of this claim. Encountered by the artists in their daily walks around their neighbourhood, the many different signs depicted in these pictures – some attempting to exercise social control, others to assert civic disobedience – take their place within the art of Gilbert & George as a pre-existing visual language that is real and alive on the city streets. A highly inventive and original visual vocabulary embellishes the dense webs of personal, moral and ideological tension that these signs and slogans create. Possessing a universality of content, temper and meaning, they describe the social climate of modern urban life.

In seemingly simple, vivid primary colours, the figures of the artists often masked, hooded or obscured, yet always quietly and respectably be-suited, the UTOPIAN PICTURES convey the experience of an accelerated, violent, vertiginous, clamorous, technological, multi-faith and multi-cultural teeming city. It is within this very clamour – this dissonant roar of conflicting intentions and ideals – that we might in fact discern ‘Utopia’: a society describing perfection through its allowance of imperfection and disorder.” 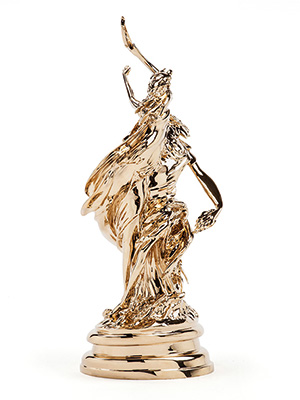 Over the past two decades, in its premises in Berlin and Singapore, as well as formerly in Zurich, New York, Melbourne and Sydney, ARNDT has produced more than 320 exhibitions with 55 publications featuring leading emerging and established Asian and international artists. ARNDT also participated in more than 140 art fairs around the globe, such as Art Basel, Art Basel Miami, Art Basel Hong Kong, Art Stage Singapore, FRIEZE London and many others.

The anniversary exhibition marks the commitment of the gallery and its founder Matthias Arndt to the new location in Singapore. Fifty artworks by 39 artists from Central and Southeast-Asia, the United States, Germany, Europe, Russia and Australia will be presented at ARTSPACE@Helutrans from 16th January to 15th February 2015.

Event: Lasalle Public Lecture Series: In Conversation with Gilbert & George
When: Thursday, 22 January 2015 from 7 – 9:30pm (including refreshments)
Venue: The Singapore Airlines Theatre, LASALLE College of the Arts (Basement), 1 McNally Street, Singapore 187940
Description: For the first time in Singapore, Gilbert & George will discuss and share insights into their art and life. The session will be hosted by British novelist Michael Bracewell.
Register: Free admission but pre-booking is required. Please reserve your seat at www.eventbrite.sg