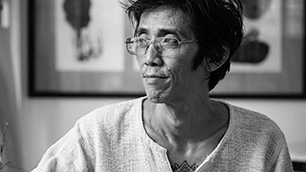 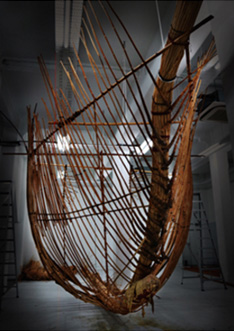 Zai Kuning, Bow of the 17 metre-long ship made of rattan and joined only by strings and wax. Gillman Barracks studio, Singapore, 2017.

Multidisciplinary artist Zai Kuning will represent Singapore at the 2017 Venice Biennale from 13 May to 26 November 2017, as announced by the National Arts Council, Singapore. Dapunta Hyang: Transmission of Knowledge is a culmination of over 20 years of Zai’s research on Malay culture and history in Southeast Asia.  Having spent more than a decade with, and creating work on the orang laut (sea people) of the Riau Archipelago – the pre-nation and pre-colonial inhabitants of both island and sea in the region – Zai’s experiences have significantly fed into his broader inquiry on identity.  He has come to intimately know the harsh conditions in which they live: their customs, practices and beliefs; and as a people marginalised and discriminated against.

The exhibition for the Biennale builds upon a recent series that takes Dapunta Hyang Sri Jayanasa, the first Maharaja of the early kingdom of Śrīvijaya, as its vantage point. The success and influence of the empire is captured within Zai’s work through the symbol of the voyage, which is central to the exhibition.  Dapunta Hyang: Transmission of Knowledge is thus a starting point in which to engage with this history and knowledge, going back in time to the seventh century.  Through this, we can gain a better understanding of what and who we are, and the actions and even accidents that brought us here.

As the first artist to revive the mystical story of Dapunta Hyang, Zai calls forth the grandeur and sheer force of a maritime world that has been cast in darkness for centuries.  The project is not a presentation of history through material and object, nor is it about ideology or politics – it is instead, about a sense of fellowship and solidarity that arises from understanding our history and knowing who we are.

Viewers will have the opportunity to reflect upon elements that the work combines: a ship made of rattan, strings and wax, carrying within its hull ghosts of the past, even as it unloads its sealed books in the present. On a facing wall, running parallel to the ship’s belly, photographic portraits of living mak yong performers will hang. Mak yong – a pre-Islamic operatic tradition among fisherman that was once widespread across Dapunta Hyang’s lands – is on the brink of disappearing, sustained only by a few remaining masters. In the background, the audience will hear an acoustic recording of the faint voice of a mak yong master, speaking a language few still understand.

Through the synthesis of Dapunta Hyang, mak yong and orang laut, Zai communicates the urgent need to resurface questions on the transmission of identity, culture and history in Southeast Asia.