2014 Cultural Medallion and Young Artist Award recipients have been announced 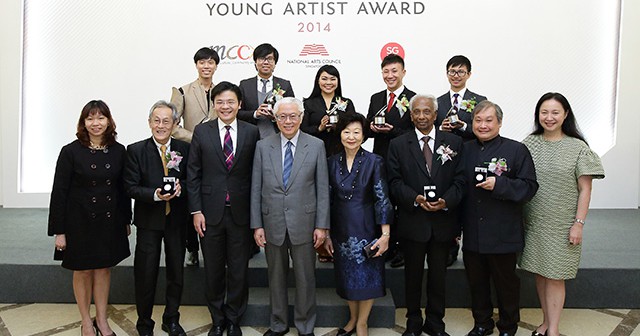 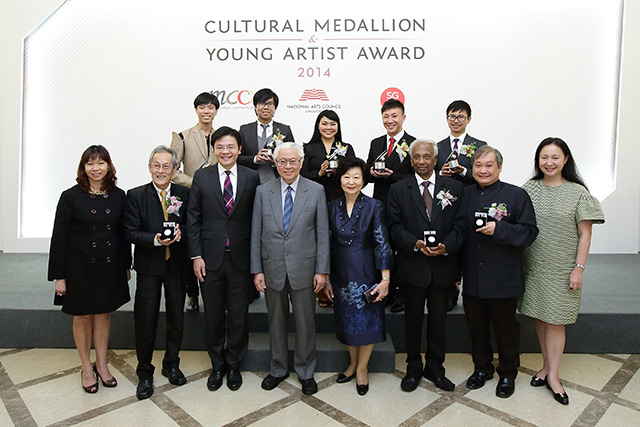 Singapore honours three distinguished arts practitioners with the Cultural Medallion (CM) in recognition of their contribution to the development of our arts and cultural scene. The Young Artist Award (YAA) was also conferred to five young artists who are making a mark through their artistic dynamism and outstanding potential to be key contributors in the artistic community.

The CM will be conferred by the President of Singapore, Dr Tony Tan Keng Yam, to poet and writer KTM Iqbal, sculptor Chong Fah Cheong and theatre director Alvin Tan. As respected members of our pioneer generation, KTM Iqbal and Chong Fah Cheong have both created works that are enjoyed by the young and old alike. KTM Iqbal’s insightful poems have graced the region’s leading newspapers and magazines, and are included in Tamil texts for Singapore schools. Chong Fah Cheong’s commentary on society through the mediums of wood, metals and stone have been coveted by museums for their permanent collections. His public commissions located across the island have profound resonance with the people in Singapore and have become icons of their respective sites.

Alvin Tan joins the esteemed ranks of CM recipients who have also been conferred the YAA earlier in their careers – particularly Ong Keng Sen, Eric Khoo, Liang Wern Fook, Jennifer Tham and Ivan Heng. Alvin Tan was a YAA recipient 17 years ago in 1998. Since then, Alvin has gone on to direct more than 70 plays that were staged locally and in over 19 cities around the world. He established The Necessary Stage, one of the most prominent and respected theatre companies in Singapore and helmed the M1 Singapore Fringe Festival as Co-Artistic Director. With a heart for the community, he also launched a ground-breaking Theatre for Seniors programme, and plays an instrumental role in collaborations with both local and international artists.

The five YAA recipients, who will receive their awards from Mr Lawrence Wong, Minister for Culture, Community and Youth are:

Chen Zhangyi, Composer
His compositions have been performed by world-renowned orchestras of the highest rank, such as the London Symphony Orchestra, Baltimore Symphony Orchestra and Tokyo Philharmonic Orchestra. Shining on an international stage, he is influenced by the late CM recipient (1982) – composer, conductor and educator Leong Yoon Pin.

Ian Loy, Theatre Practitioner
Ian Loy is the co-director of the Esplanade’s PLAYtime series; he also helms his own theatrical production house, MySuperFuture. Ian Loy has broken ground through theatre with and for young audiences, and audiences with special needs. By engaging educational institutions thorough theatre programmes, he uses the power of theatre to create positive influences for young minds.

Jow Zhi Wei, Film-maker
Zhi Wei is the first Singaporean to be accepted into the two-year Art Residency at France’s prestigious Le Fresnoy. His short film, After The Winter, was selected to premier at the 66th Cannes Film Festival’s Cinefondation programme in 2013. His short films have been presented at more than 15 local and international film festivals including Spain, Germany, Thailand and Russia.

Lee Mun Wai, Dance Artist
His fluidity and musicality in more than 50 outstanding performances of contemporary dance and choreography has earned him critical acclaim. Regarded as a role model by the dance community, one of his dance mentees, Tania Goh, received honourable mention at the Sprouts 2013 choreographic competition for budding dance artists – a testament to his passion and positive influence.

Siti Khalijah Zainal, Theatre Actor and Collaborator
She began her journey in theatre in 2003 when she graduated from the Theatre for Youth Ensemble programme organised by The Necessary Stage, and has proven her dedication and versatility through stellar performances in both ensemble sets and solo productions. Siti Khalijah was involved in seminal and award-winning works such as Model Citizens and Gemuk Girls.

CM and YAA recipients will have access to the CM Fund and YAA grants respectively for the continual development of their artistic practice and to fund their efforts to reach out to more Singaporeans through their art form. As part of the NAC’s capability development efforts, the grant quantum for YAA recipients to undertake arts projects or studies within two years of receiving the award is $20,000. The grant allocated to each CM recipient from the Cultural Medallion Fund, to be used for a single project or multiple projects over the recipient’s lifetime, is $80,000.

“Our Cultural Medallion and Young Artist Award recipients are beacons of pride for all Singaporeans. Year on year, they continue to be emblems of Singapore’s cultural creativity and artistic promise. Each of them has gone on to become role models and leaders in their own field and within the artistic community; their pursuit of excellence in their respective crafts has been a source of inspiration for both young emerging artists and established ones as well,”

The public will have the opportunity to meet the esteemed CM recipients and hear their personal stories through the Cultural Medallion Speaker Series, which was first introduced in 2012. This year, NAC has also introduced the CM Speaker Series in Schools. Targeted at students between the ages of 15 and 18 years, the CM Speaker Series in Schools has since reached out to eight schools and almost 500 students, featuring CM speakers Angela Liong (dance), Jeremy Monteiro (music), Ho Ho Ying (visual arts) and T. Sasitharan (theatre).